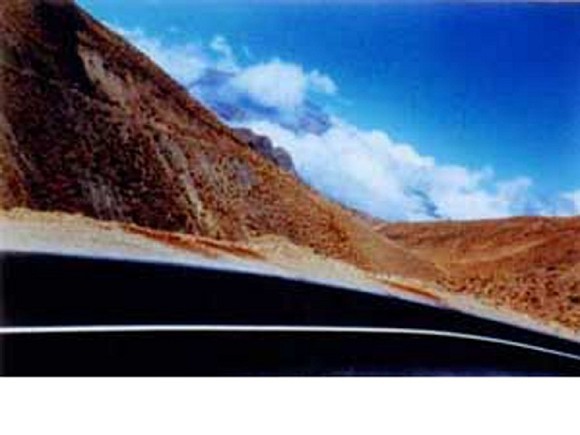 "While photography is not necessarily an invitation to daydreaming, it can be. If dreaming consists of fleeing the city and its constraints, if dreaming means going back to sources - and therefore to nature - then photographing of nature can be considered an incitation to dreaming. For someone who was born in an apartment and who is used to towering buildings, cars, traffic jams, underground tunnels, the language of advertising and whose life takes place beneath a grey and cloudy sky, nature has a whole other signification. In my opinion, the nature here is the opposite of human and its needs. We often have the tendency to forget this reality". - Abbas Kiarostami

On the search for motifs and sites the Iranian filmmaker Abbas Kiarostami embarks on journeys throughout Iran. From his home town Tehran, he travels north in the direction of the Caspian Sea, sometimes to Kurdistan near the Iraqi border. In his work Kiarosami adjusts to the situation which he finds in nature. It provides him with various possibilities, defines the variations of images, which arise out of the change in seasons, the change and quality of light. The persons involved move within this nature as on a stage, constituting a setting for the action which results in the static quality through minute long, uncut panoramic sequences. Kiarostami´s photographs are complete works in themselves, neither stills nor strict storyboards of his films, they function through similar structuring elements, remaining autonomous nonetheless. They depict various remote and spiritually loaded places - a cohesive image past exhibitions of the Iranian landscape. The plot partially takes place outside the viewer´s visual field, beyond the camera´s gaze. The off introduces an additional space in which Kiarostami´s cinema is just as naturally operating as it is in the visible.

The films are often structured through these kinds of refusals of view: the center of the protagonists desire, as well as of their story, which the film is telling, remains absent. The non-present, not explicitly stated produces a free field for projections for existential questions without posing them or a possible answer directly: "I want to put the viewer into a particular mood without presenting something directly. He comprehends something without seeing". In his last film The Wind Will Carry Us (2000) , a car moves along serpentine roads. The camera looks down on this panorama from up high. The viewer follows the conversation of the car´s inhabitants in the off. Towards the end of the film, the person who was driving the car is sitting on the back of a motorcycle driven by an old man. This time, the winding roads leads through meadows. The development from the beginning to the end of the film leads from the selective perception of the viewer to a comprehensive sense of being. The essence of his films contains more than the narrative elements of the plot. It lies in the untold in between. All of this is captured in the photographs in a single shot: while looking results in a deepening perception - proportional to the time taken by the viewer - the images develop a meditative and suggestive power which preceeds in a way similar to the films.

The exhibition at Kunst-Werke shows a selection from the extensive past exhibitions of Kiarostami´s pictures from various films. It´s not important to trace them back to a film plot; the story they tell speaks for itself. They´re not about the examination of the nature of cinematic or photographic representation, but rather about fundamental questions of human existence. The special thing about Kiarostami´s work is that it´s capable of carrying this undoubtedly heavy weight. Everything that´s heavy is made light of in his deceptively simple images. Kiarosami´s images are nearly transparent. Their parabolicalism is identical to their naturalism. Kiarostami needs neither symbolic nor allegorical means: it´s not about charging objects, persons, images or tableaus with meaning and burying them under it. Comprehensibility of an existential rather than psychological nature appears on account of an empathy for what is in so many respects foreign.