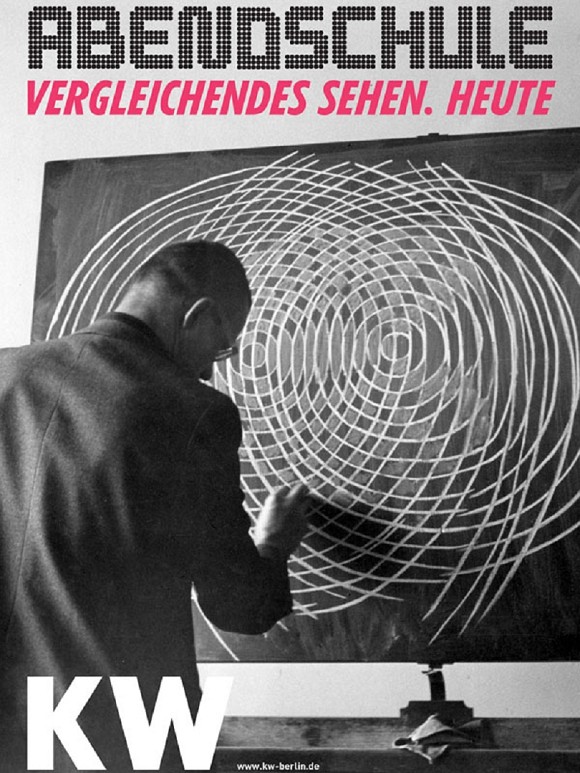 Comparative visual analysis entails a dialogical perception and the application of visual thinking. At the beginning of the 20th century Swiss art historian Heinrich Wölfflin pioneered the development of comparative formal analysis in the history of art. For the first time ever, reproductions of artworks were projected side by side using a set of twin parallel projectors. What back then was a revolutionary approach on his part, remains to this day still the most common method in art history, even despite the presence of PowerPoint. With Evening Classes this academic practice is now integrated into the exhibition context, though not without liberating it from its indoctrinating usage and by questioning it as a method. Implicated in this series of events is the invitation for unexpected test arrangements and comparative situations that allow both to support and topple this methodology.

Ursula Frohne: Anamorphosen des Kinos (Anamorphoses of cinema)
What can one image have in common with another one? Where can we locate the intersection of their comparability? In which ways could a sequence of images in a video projection by Douglas Gordon be related to a painting from the 16th century? This lecture will open up a deviant perspective on the concept of the kidnapped cinematic icon by looking at The Ambassadors (1553) by Hans Holbein the Younger and Douglas Gordon's 24 Hour Psycho (1993) in parallel. Through the lens of the anamorphic pictorial logic of Holbein's painting we will look at how Gordon appropriates and temporally distorts Hitchcock's film. Comparative visual analysis – in which the frontal perspective onto the single work is displaced by an oscillating, discursive way of seeing – reveals which cognitive pursuit even historically far distanced artistic positions have in common: to articulate the latency of visual representation. (Lecture in German)

Between 1995 and 2001 Ursula Frohne was both curator of the Museum für Neue Kunst | ZKM and lecturer at Karlsruhe University of Arts and Design (HfG). In 2001 she was guest professor at Brown University, Providence, Rhode Island (USA). From 2002 to 2006 she was a lecturer in art history at International University Bremen. Since 2006 she is professor in art history at the University of Cologne where she teaches 20th and 21st century art. In 2007 she became the director of the project „Reflexionsräume kinematographischer Ästhetik“ within the German Research Foundation (DFG).

With kind support by the Ernst Schering Foundation and the Capital Cultural Fund, Berlin.

We cordially thank the Lette Foundation for the seating.