CANCELED:
Alia Farid
At the Time of the Ebb &
Maske Paske Wi 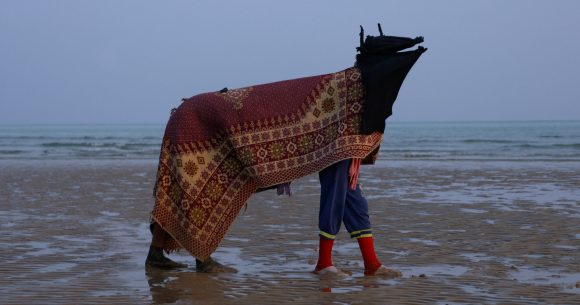 Alia Farid (born in 1985, RQ) lives and works between Kuwait and Puerto Rico from which she both origins and whose complex colonial histories she aims to reveal through drawings, objects, spatial installations, and films. Farid began making work between art, architecture, and urban anthropology—and as she notes:

“I’m still interested in these areas today but focus much more on telling how informal networks are forced to make up for the lack of formal structures, because one of the things I value most is the subversive quality of work which goes unnoticed and is often self-initiated and organized.”

In opposition to the frequently encountered Western imperialist constructions in news and politics, Alia Farid’s work examines the global South through the lens of one of its own. As such, the environments in which she works are transformed from being exploited resources protecting Western interests into sovereign territories where diverse lands, inhabitants, and ecosystems are able to speak for themselves.