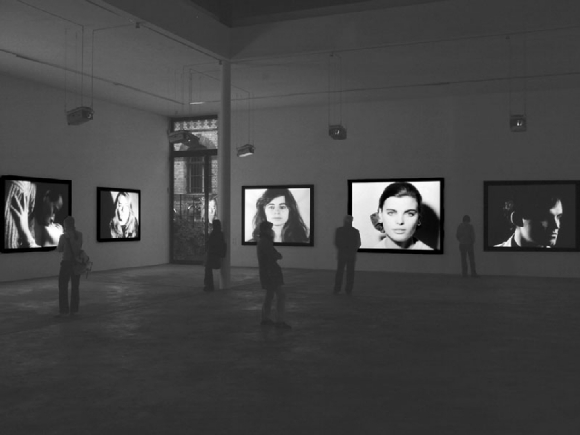 On the occasion of Das MoMA in Berlin, the Museum of Modern Art's painting and sculpture collection being presented at the Neue Nationalgalerie in Berlin, KW Institute for Contemporary Art will present Andy Warhol: Motion Pictures. P.S.1/MoMA and KW have closely cooperated for the last 6 years and this exhibition reflects on the continuous collaboration.

In 1963, after painting such American icons as the Campbell Soup can, the Coca-Cola bottle, and Marilyn Monroe, Andy Warhol purchased a 16mm camera and began an astonishing five-year period of filmmaking, directing more than one hundred short and feature-length films including a series of silent films of 1963 - 64, Haircut (No. 1), Sleep, Empire, Eat, Kiss, Blow Job, Henry Geldzahler, and sound films such as Chelsea Girls of 1966 and Lonesome Cowboys of 1967. Concurrently, in 1964 - 66 Warhol experimented with the filmed portrait in a series of approximately five hundred black and white, silent movies he titled Screen Tests. In 1968, an attempt was made on Warhol's life. He quit directing and instead produced films by Paul Morrissey (Flesh, Heat, and Trash, among others). In the early 1970s Warhol withdrew his films from distribution, and acquired a video portapak system with which he created the Factory Diaries and other video and television work. Before his death in 1987, he determined that his films should be cared for by The Museum of Modern Art, and in 1997 The Andy Warhol Foundation for the Visual Arts completed the donation of the surviving four thousand reels of original footage and print materials. Generous support from the Foundation enabled the Museum to preserve and return to circulation films hidden away for two decades.

Among Warhol's cinematic oeuvre, the black and white silent films are the most daring and experimental of his moving images in their selection of subject and theme, psychological acuity, rhythmic pacing, and sheer beauty of form photographed with stark light or deep shadow. Although these films were originally shot at the speed of sound film, or twenty-four frames per second, Warhol specified that prints be projected at a slower speed of sixteen frames per second, a rate used in the projection of silent films in the early period of cinema, from the 1890s through the 1920s. For this exhibition, a selection of Warhol's films made in 1963 - 66 has been transferred from 16mm film to DVD at the speed of sixteen frames per second, and projected onto screen and monitors in a gallery setting. Thus it is again possible to see the works as Warhol intended them to be viewed and enjoyed, and to appreciate the ways he challenged and provoked both sitter and viewer in his manipulation of moving images.

The Screen Tests comprise approximately five hundred individual films, shot at his studio, the Factory, on East Forty-seventh Street. The sitters were models, performers, artists, writers and poets, dealers, friends, and others who wished to be famous. Warhol's "superstars" were filmed several times over, particularly his "most beautiful women", such as "Baby" Jane Holzer, Edie Sedgwick, and Ivy Nicholson. Subjects were usually asked to sit on a chair facing a stationary camera and to attempt not to move for the three or more minutes that it took for a one-hundred-foot roll of film to run through the 16mm camera. Deceptively simple yet sumptuous, the lighting varied from bright to dark, or light or shadow would be cast directly on the sitter's face and often splendidly coiffed hair. (Tresses were as important as facial features in many tests.)

Although the tests, like his other silent black and white films, were originally filmed at the speed of sound film, or twenty-four frames per second, Warhol specified that prints be projected at a slower speed of sixteen frames per second, a rate used in projection of silent films. The result is an unusual fluidity of pace, a rhythm gently at odds with the starkness of the lighting and the boldness of the close-ups of face and hair. As with any portrait, there is participation by the sitter, ingeniously or nervously, sadly or hilariously reacting to the challenge of the camera. Walter Burn seems sublime in his stillness, Dennis Hopper moves to his own music, Chip Monk and Cass Elliott know how to smile, "Baby" Jane Holzer chews gum or brushes her teeth with sexual immodesty, Beverly Grant imitates Theda Bara, James Rosenquist circles about on a moving stool. The beautiful women stare, tear up in the bright light, preen and pose; most wistful is Edie Sedgwick. Piero Heliczer reminds us of Rudolf Valentino with a warmer smile, and Salvador Dalí sees the world upside down.

The screen test traditionally serves as a filmed audition for an actor being considered for a motion picture role. The production studio and the director wish to see what the camera will reveal of the personality and appearance of the actor, of his or her ability to express words and states of emotion or, subtly or boldly, to offer a kind of blank slate on a large and mesmerizing scale, allowing audiences to project their own thoughts and feelings through the still gaze of a beautiful face on the silver screen. Warhol made his Screen Tests serve these ends — they helped him to cast for his films, which depended at least as much on personality and pose and repetition of imagery as on a traditional story line or development of character. Warhol celebrated fashion as fashion celebrated beauty, and celebrity was hip. None knew better than Warhol how to play with the superficial in virtually every form of printed and moving imagery, how to stretch a medium in startlingly various ways. In the Screen Teststhere is texture and beauty behind the dazzle or deadpan of his sitters' moods, a probing curiosity about the nature of portraiture, and a fluidity and ease in experimenting with shifts and interactions of media and mediums. The held pose, its particular stillness, and the slowed motion to sixteen frames per second make the portraits impossible to categorize: are they films in slow motion, or photographs that slowly move? His paintings of Elvis or of Marilyn are serial renderings on canvas of the same image, giving the paintings the look of the film strip or other form of mechanical reproduction. Are the tests, then, film versions of paintings? Portraits may hide as much as they reveal, the intentions of the sitter and the portraitist may or may not be in harmony, the camera may be subtly or more obviously cruel in its capture of features and mood.

A publication will accompany the exhibition, edited by Klaus Biesenbach and issued in August 2004.

The exhibition has been made possible thanks to the support of the Hauptstadtkulturfonds.