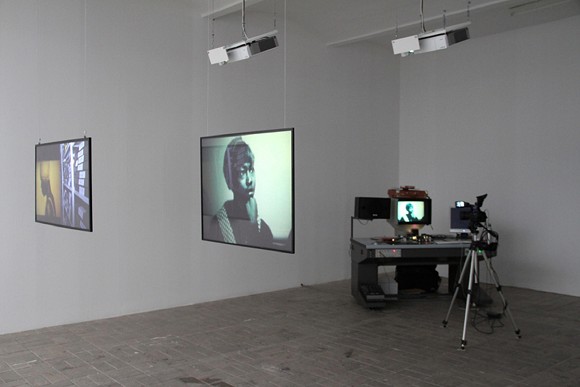 Möglichkeitsraum is a live performative installation for viewing video and film archives. In Möglichkeitsraum, the possible testimony of cultural producers who understand the archive neither as a machine, nor as a voice constellation or even as a memory or a story. Rather, they have experimented with various subject-object arrangements and have even placed themselves between the engineering plans and their segmentation, along with the arising figures, pathologies and systems that activate the space.

The producers of Möglichkeitsraum assume the role of the "new archivist", which, as Gilles Deleuze wrote in the same article on Michel Foucault, consists of a space-time constellation considered as the "rules of transition", used to distinguish the "real from the possible".

During the exhibition's run, a live digitalization on a 16-mm cutting table will be performed on the 12th, 18th and 25 of June, at 1 pm. It will be filmed in dynamic flow velocity on 16-mm films from the Arsenal archive. This process enables the documentation to take on an open form, and become a continual work in progress.