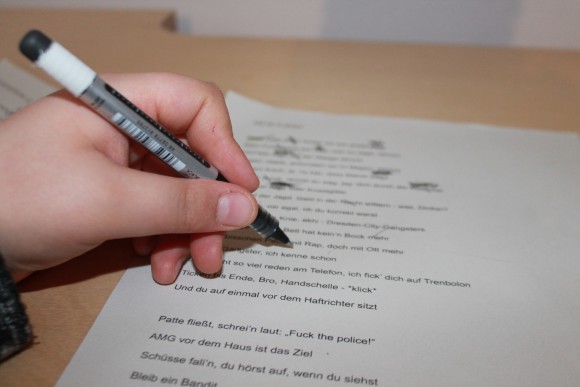 LABOR NOBEL enables up to eight students of weißensee kunsthochschule berlin annually to conceive and implement an artistic project at a cultural institution with pupils of Alfred-Nobel-Schule in Berlin Neukölln during their project week, in collaboration with a teacher and further accompanied and supported by a team of experts, and mentors. The first run took place at KW Institute for Contemporary Art among other institutions in January 2017. Based on the school’s existing structures and previous experiences, all partners wish for the establishment of a lasting cooperation scheme between art academy – school – cultural institution.

An overall of four classes of the 7th grade were involved during the first iteration, whereby one class worked together with artists Alexia Manzano, Chryssa Tsampazi, the class teacher and Katja Zeidler as their mentor on the installation Flesh by Norwegian artist Hanne Lippard at the premises of KW. The project and the process of each class within the LABOR NOBEL was documented on film, which enabled all participants to get an insight of each cooperative project on the day of the final presentation at the auditorium.

The possibility to drive change in systems and spaces through creative work was examined in reflective discussions on completion of the projects, and the potential of interdisciplinary teamwork was negotiated. These experiences stimulated the desire and urgency to further develop the cooperation with KW and weißensee kunsthochschule berlin in a modified scope in January 2018 and 2019.

What distinguishes this place from other places you go to?

What would you like to take back to school from here?

What about school do you miss in this place?

What have you experienced here so far?

Have you gotten to know something here that you didn’t know before?

What is different than how you thought it would be?

Inspired by Hanne Lippard’s artistic practice we decided to work performatively with body, language, and space. Sound poetry, action, speech and performance were going to be the components of our associative approach. We collected first inspirations about Dadaist approaches on our walks with the students through Neukölln and Mitte, for which we had prepared sensory exercises. Body contours were to be equipped with characteristics to practice self-observation and -reflection. We distorted song texts together by replacing certain words from individually chosen songs with new words from a collective context (city stroll), to subsequently record them and discuss the effects of our action.

Many of the students don’t visit cultural institutions and have no idea of what is shown and what is possible at an exhibition space like KW. The notion of what art can represent focused on the concept of “Modern Art” and painting in particular. We wanted to bring contemporary art within reach for the pupils, and strengthen their self-confidence through creative processes of their own.

We developed different methodical approaches through warm-ups, and physical and linguistic exercises. The apparent absurdity of some exercises established a connection to the exhibition as well as Dadaism and sound poetry.

LABOR NOBEL is a cooperation of the weißensee kunsthochschule berlin with Alfred-Nobel-Schule in Berlin Neukölln, the program ‘Kulturagenten für kreative Schulen Berlin’ (cultural agents for creative schools in Berlin), KW Institute for Contemporary Art, Museum Neukölln, The Museum of European Cultures, as well as the Botanical Garden in Berlin.