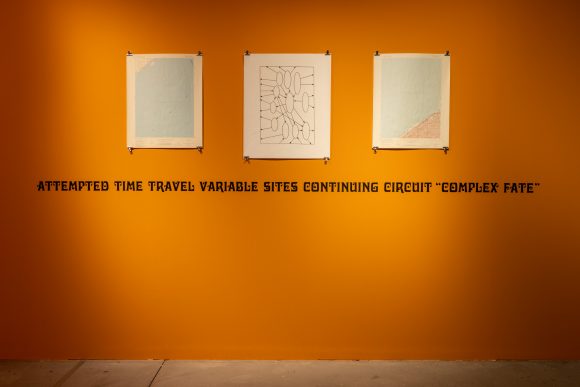 Artist Simon Leung presents a recorded audio tour of Renée Green: Inevitable Distances, drawing on his personal and critical reflections on the manner in which the 1990s are written about now, with particular attention to overlapping histories and aesthetics.

Together with the exhibition’s curator, Mason Leaver-Yap, Leung’s dialogue with Green’s exhibition is informed by his conversations with Green over their years of emergence and working (including his contribution to Negotiations in the Contact Zone, a symposium organised by Green in New York, 1994), as well as his approach to the ways in which aesthetic choices, the political unconscious, and how forms of the recent past and the politics of the present can be productive.

Simon Leung was born in Hong Kong, and lives and works in Brooklyn and Los Angeles. Leung’s projects in various media include an opera set in Griffith Park; a live/video performance addressing AIDS in the figure of the glory hole; a trilogy on “the residual space of the Vietnam War;” an extended proposal of Duchamp’s oeuvre as a discourse in ethics; a meditation on the site/non-site dialectic by way of Edgar Allan Poe; context-specific works centering on the squatting body as a heuristic cipher; and a decades-long collaboration with the late writer and art world figure Warren Niesłuchowski.

Leung’s more recent works include ACTIONS! and ACTIONS! / ADJUCNTS!, “art workers’ theater” on the intersection of art and labor (The Kitchen 2013, Hammer Museum 2016); Rehearsal for 9 collective movements, a performance on the communal intimacies between colonized bodies (Gwangju Biennale 2018); a curatorial project which introduced the work of Yvonne Rainer to China (Inside-Out Art Museum Beijing, 2019); and an internet lecture-performance for the pandemic age, City of Squatters (Queens Museum & Foksal Gallery Foundation, Warsaw 2021). At the heart of all of Leung’s work is a meditation of the ethical, broadly defined, as condition, proposition, and possibility. Leung has received the Art Journal Award from the College Art Association for his writing, as well as fellowships from the Guggenheim Foundation, Clark Art Institute, Fellows of Contemporary Art, New York State Council on the Arts, New York Foundation for the Arts, City of Los Angeles, California Community Foundation and Art Matters. He is Professor of Art at the University of California, Irvine, and co-editor, with Zoya Kocur, of Theory in Contemporary Art Since 1985.