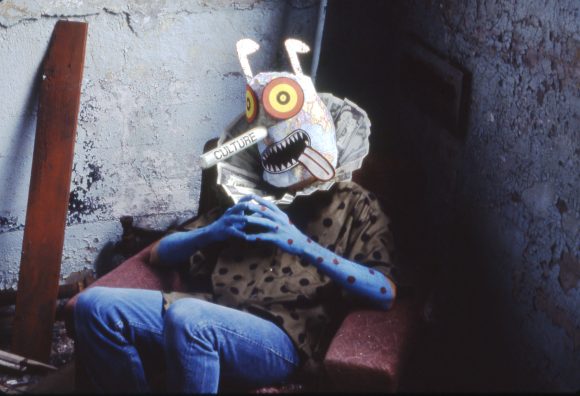 David Wojnarowicz was a writer as much as a visual artist. Not only has he written multiple publications; language and literary influences recur in his paintings, photography and films. Texts recited by him demonstrate a captivating ability to artistically express his passion, engagement as well as his rage with words and his voice. For The Berlin Sessions: Reading David Wojnarowicz Léon Kruijswijk (curatorial fellow KW) invited three performers and writers to explore and unfold Wojnarowicz’s literary works. The reading session takes place at Eisenherz – a bookstore that has been an iconic place for Berlin’s LGBTQI+ community for over 40 years.

MYSTI is a writer and performer from South Dakota based in Berlin since 2010. MYSTI presents How Do We Make Art of Human Remains? in meditation on the work and life of David Wojnarowicz. His book Close to the Knives. A Memoir of Disintegration (1991) inspired activist David Robinson to dump the ashes of his lover Warren Krause in front of the White House in 1992, and the remains of Wojnarowicz would be also spread over the same lawn in a separate action four years later, but how might we now reconsider bodies as material for art and protest? Is art perhaps the body we could sacrifice for life?

Alex Alvina Chamberland is a Swedish-US American writer and performance artist based in Berlin. Much of her writing and performance work is based on explosivity, intensity, musicality, vocal experimentation, silence, maximalism and (trans)femininity, dealing with subjects such as failure and passivity as a means of resistance to obligatory capitalist success and productivity, as well as loneliness, yearning and collectivity. She’s had two books published in Swedish, before recently switching to writing in English.

Ever present on the alternative scene as a multifaceted artist, constantly questioning the essence of her work and the world we live in, Valerie Renay is a Berlin based, French Caribbean performer, director, electronic pop chanteuse, musician, painter and DJ. She is one of the protagonists in Aids Follies, a contemporary multimedia theater piece documenting the aids epidemic, which combines revue, lecture performance, documentary film and pop culture.