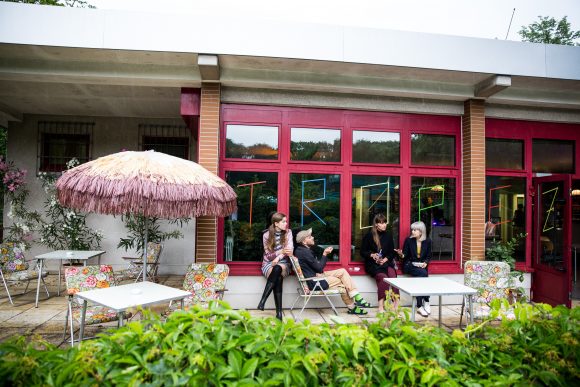 Since 2017, every Thursday an artist is organizing an evening at Bob’s Pogo Bar. Based on their own artistic practice, ephemeral and experimental events emerge in the bar which can alternate between concerts, performances, plays, and film screenings and for which a special drink is served during the night. The curators Maurin Dietrich and Cathrin Mayer understand Bob’s Pogo Bar as a social space that reflects on the current diverse artistic production both locally and internationally. The bar follows the format of Bob’s Your Uncle, a bar that was held at Kunstverein in Amsterdam from 2014 to 2016, and refers to the Pogo Bar, which was a club in the basement of KW Institute for Contemporary Art around the turn of the millennium.

For the duration of the summer 2018, Bob’s Pogo Bar will find its temporary location at Tropez. Tropez is a space for art inside the public pool Sommerbad Humboldthain in Berlin-Wedding, initiated by art historian Nele Heinevetter.