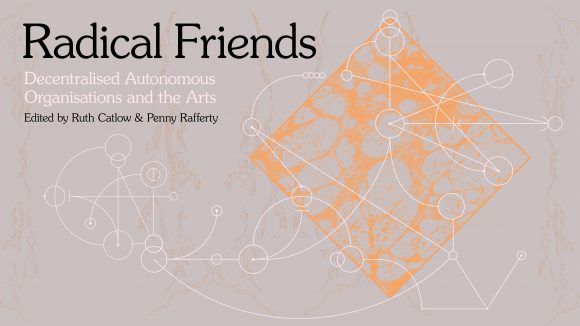 Radical Friends is an urgent book for the 21st century and beyond. It shows us, in the spirit of the legendary poet and artist Etel Adnan, that the technology of the future needs to be about “togetherness, not separation. Love, not suspicion. A common future, not isolation.” – Hans Ulrich Obrist

Join Ruth Catlow and Penny Rafferty – editors of the new book, Radical Friends – in exploring Decentralised Autonomous Organisations (DAOs or technology enabled member-owned communities without centralised leadership) and their potential in the arts. Catlow and Rafferty will introduce the book followed by provocations from contributors, Paul Seidler from Terra0, Hito Steyerl and Cassie Thornton. This will then be followed by a live Q+A with the audience.

In recent years DAOs have been heralded as a powerful stimulus for reshaping how value systems for interdependence and cooperation manifest themselves in arts organising. Radical Friends – Decentralised Autonomous Organisations and the Arts consolidates five years of research into a toolkit for fierce thinking, as well as for new forms of radical care and connectivity that move beyond the established systems of centralised control in the art industry and wider financial networks.

At a time when so many are focused on NFTs, Radical Friends refocuses attention on DAOs as potentially the most radical blockchain-based technology for the arts in the long-term. Contributors engage both past and emergent methodologies for building resilient and mutable systems for mutual aid. Collectively, the book aims to evoke and conjure new imaginative communities, and to share the practices and blueprints that can help produce them.

Ruth Catlow is an artist, curator and researcher of emancipatory network cultures, practices and poetics. She is co-founding co-director of Furtherfield, co-editor of Artists Re:thinking the Blockchain (2017) and founder of DECAL Decentralised Arts Lab experimenting with blockchain and web 3.0 technologies for fairer, more dynamic and connected cultural ecologies and economies. She is PI at the Blockchain Lab at the Serpentine Galleries R&D Platform.

Penny Rafferty is a writer, critic and visual theorist based in Berlin working as an auditor and researcher at the crossroads of art, culture and technology. Departing from her research and thinking she has initiated and co-founded Black Swan (2018 – ongoing), a proto-institution for interdisciplinary research and practice.

Paul Seidler is an artist/researcher living and working in Berlin. Since 2013 he studied at the University of Arts Berlin where he co-founded terra0. His projects and papers have been presented at Leap Berlin, CTM, Transmediale, Dutch Design Week and ecocore.

Hito Steyerl is a filmmaker and writer based in Berlin.

Cassie Thornton is a post-institutional (feral) artist and activist who makes a “safe space” for the unknown, for disobedience, and for unanticipated collectivity. Cassie Thornton and many of her friends and collaborators formed The Hologram, a viral collective peer-to-peer health practice in which three people (a triangle) are invited to listen and ask questions of a fourth person (the hologram). Her work on this project aims to question some assumptions around health and care in the context of capitalism, and to search for something better underneath. Her book, The Hologram: Feminist, Peer-to-Peer Health for a Post-Pandemic Future, is available from Pluto Press.

There will be copies of Radical Friends ready for sale throughout the event, as well as post-event via the KW Bookstore.

Radical Friends was made possible through support by and in collaboration with the Goethe-Institut London, Serpentine R&D Platform and Furtherfield’s Decentralised Arts Lab DECAL. With special thanks to Katrin Sohns, Head of Programmes Goethe Institut, and Mario Schruff, Culture Department, Visual Arts and Music Programmes Goethe Institut, and Ben Vickers, Co-founder Ignota.