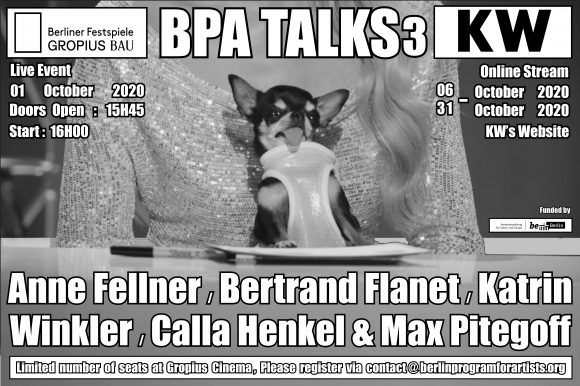 BPA Talks is a three-part public lecture series in partnership with BPA// Berlin program for artists. This third edition will take place at the Cinema of Gropius Bau. In 45-minute presentations, BPA participants Anne Fellner, Bertrand Flanet and Katrin Winkler will each present their work to the general public. Afterwards, BPA mentors Calla Henkel and Max Pitegoff will share their thoughts on alternative structures for artistic exchange. BPA Talks are flexible in format, ranging from introductory presentations of the artist’s work to lecture performances.

Anne Fellner’s narratively expressive paintings navigate a broad field of styles and materials. For her talk, she plans to speak about two different projects and how they are related to each other: her recent solo exhibition Signs and Portents at Damien & The Love Guru, Brussels and the upcoming project Point No Point for BPA at Gropius Studios.

5 pm
Bertrand Flanet
To name things by the distal zones

Bertrand Flanet will address some of the factors that impact the realization of his work and how these cause the transformation into monsters. Bertrand Flanet’s practice mainly elaborates on 3D animation videos in which he composes narratives that reflect and fictionalize upon the latent forms of alienation born out of our societies.

Katrin Winkler will present her film performing monuments in conversation with Diana McCarty. The film is the continuation of her thematic examination of the consequences of colonialism, genocide and apartheid in Namibia. Her artistic research in terms of concepts such as monument, memory, recognition and responsibility examines how history is written, what social conditions are behind it and what critical potential is formulated.

Diana McCarty lives and works in Berlin and is a founding editor of reboot.fm. As a cyberpunk in the 1990s, she was active in critical Netzkultur. Her work revolves around art, gender, politics and technology. McCarty is a proud Chicana from Albuquerque, New Mexico. She is a 2019/2020 bak Fellow.

Calla Henkel and Max Pitegoff will show an excerpt from their in-process film series Paradise, Episode 1: Tara & Josef, 2020, which they are currently filming at their bar TV, while drawing on texts about fictions and alternatives within artist-run structures that reflect on performance, labor, language and collapse.

Calla Henkel and Max Pitegoff are artists who have been working together for over a decade after meeting during their studies at Cooper Union in New York. They live in Berlin, where they have initiated several artist-centered spaces such as Times Bar (2011-2012) and New Theater (2013-2015). In 2017–2018 they led the Grüner Salon at Volksbühne, where they staged their own original productions while inviting performances by other artists. In 2019, they opened TV, a bar, performance space, and production studio. They have exhibited their artwork and performances in solo exhibitions at Fri Art Kunsthalle (2020), Kunstverein Hamburg (2018), Schinkel Pavillon (2016), The Whitney Museum (2015) and in group exhibitions at the Pinakothek der Moderne (2018), the Museum Ludwig (2016), and the 9. Berlin Biennale (2016). They have been guest professors at HfG Karlsruhe, the Gerrit Rietveld Acadamie, NYU Berlin, and the Politecnico di Torino. They have been Mentors for BPA since 2016.

BPA Talks 3 is the third public event in the framework of the 2020/21 partnership between KW, BPA and Gropius Bau.