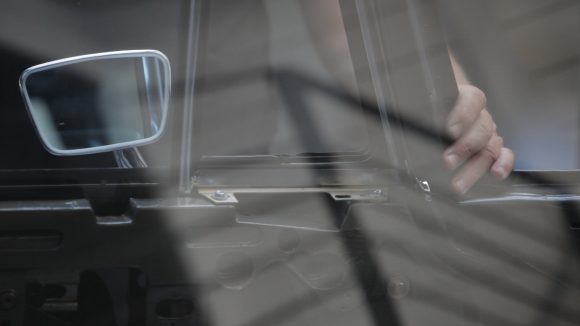 BPA Talks is a three-part public lecture series in partnership with BPA// Berlin program for artists. In February, the first of three BPA Talks will take place at KW. In one-hour presentations, BPA participants Rob Crosse, Victor Payares, Doireann O’Malley, and Esper Postma will each present their work to the general public. Afterwards, BPA mentor Clémentine Deliss will share her thoughts on alternative structures for artistic exchange. BPA Talks are flexible in format, ranging from introductory presentations of the artist’s work to lecture performances.

One day all this could be yours (part 2)

Rob Crosse will present a new performance piece titled One day all this could be yours (part 2), which uses the physical memory of opening and closing windows of cars he has previously driven, in order to discuss connections between care and automation. Crosse works across video, performance, and photography, focusing on forms of intimacy, intergenerational care, vulnerability, and desire.

Where is the ground?

Victor Payares will present a performative reading of two short stories accompanied by images of his work. As if to portray a memory or a dream, he uses layers of different materials, found objects, sand, and electrical cables. Architecture, observation, and cartography are reappearing references in his work.

Payares studied at the Art Institute at Miami International University of Art and Design (US) and the Royal College of Art in London. Recent solo exhibitions include Ring Bell (2018), Aqbar the Space, London; ESOL Parcheesi (2017), Roman Road, London; and Mi Toronja (2016), Lychee One, London. Selected recent group shows were Get some Headspace (2019), Ralph’s, Köln (DE); Into the Woods (2018), HE.RO Gallery, Amsterdam; and Searching for Magic and The Distorted Image Falling from Your iCloud (2017), The Dot Project, London.

Steph Holl-Trieu is currently finishing her M.A. at the University of Arts Berlin, researching in the field of media theory—particularly the interface of digital materialism, aesthetics and the political economy.

The Absence of Toto Koopman

In his performance lecture, Esper Postma will speak about his research into the life of family member, fashion model, gallerist, archeologist, and spy Toto Koopman (1908–1991). Postma’s films, objects, and installations explore the ways in which history and collective consciousness are produced and these shared definitions subverted through marginalized histories and intimate personal accounts.

Clémentine Deliss will speak about organs as rhetorical systems with political and dialogical ramifications. She uses this metaphor to investigate chronic breakdowns in art and to compose a metabolic alternative.

Dr. Clémentine Deliss is a curator, publisher and cultural historian. Between 2010 and 2015, she directed the Weltkulturen Museum, Frankfurt (DE), instituting a new research lab to remediate collections within a post-ethnological context. In 2015, she was Fellow at the Wissenschaftskolleg, Berlin and in 2016, co-curator of Hello World at the Hamburger Bahnhof, Berlin. In 2017–2018, she was Professor at ENSAPC Paris and held an International Chair at Université Paris 8. Between 2018–2019, she was Professor of Curatorial Theory and Dramaturgical Practice at the Karlsruhe University of Arts and Design (DE). Deliss is currently Guest Professor in History and Theory at HFBK Hamburg (DE), Faculty at Large at SVA New York (US) and Guest Mentor of BPA since 2019.

BPA// Berlin program for artists is a mentoring program founded by Angela Bulloch, Simon Denny, and Willem de Rooij that facilitates exchange between emerging and established Berlin-based artists through reciprocal studio visits, public lectures, and joint exhibition projects. BPA Talks is the first public event in the framework of the 2020/2021 partnership between KW and BPA.