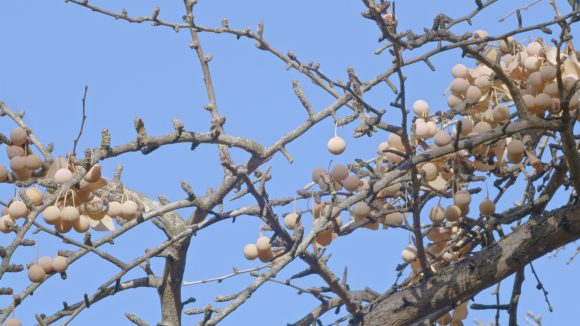 Humans live on the same planet with ginkgo—a living fossil that has been around for 200 million years. However, ginkgo may be nothing more than a street tree, integrated in the city; as urban planners often choose it because of its prominent ability to adapt to various climates and resist pollution and pests. Most likely, you have passed by or accidentally stepped on this strange smelling fruit without being aware of its delicious taste and longstanding use in dietary supplements.

In her most recent project, Tang Han explores the cultural-historical relationship between ginkgo and humans, and contemplates the temporality of ginkgo in relation to that of other existences. December marks the last chance of the year to pick ginkgo nuts. For this tour, Han invites you to walk with her through the streets and squares of Berlin to identify and observe ginkgo trees, and collect the nuts of these fallen “public fruits”. Afterwards, at KW Institute for Contemporary Art, the chefs from UUU will serve a tasting of candied ginkgo and kombucha made from ginkgo leaves.

Tang Han is an artist who lives and works in Berlin. Her practice is based on her own experience of cultural collision, and critically revolves around questions and phenomena in everyday life by using diverse artistic mediums including video, film, installation, and text. Her work has been shown in exhibitions at Kunsthaus Dresden, OCAT Shenzhen, and HOW Art Museum, Shanghai. She has screened work at film festivals including the International Festival of Films on Art, Montréal, Taiwan International Documentary Festival, DOK Leipzig, Kasseler Dokfest, Kassel, and Image Forum Festival, Tokyo.

UUU is a restaurant in Berlin-Wedding. Yuhang Wu and Jonas Borchers explore the friction between Chinese culinary traditions, the innovative spirit of modern Chinese cooking, and the local conditions and produce provided by Berlin and surroundings.