Booking required. Please RSVP at bobspogobar@kw-berlin.de. Enter at own risk. 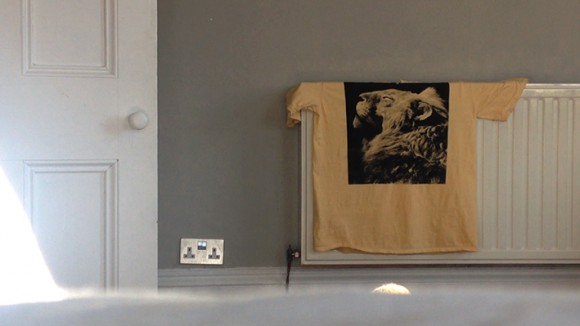 Charlotte Prodger’s new 32-minute video BRIDGIT takes its title from the eponymous Neolithic deity, whose name has numerous iterations depending on life stage, locality and point in history. Exploring the shifting temporal interrelations of name, body, and landscape, BRIDGIT focuses on female attachments—a process of identification that includes friends, shape-shifting deities and other figures of influence.

At one point in the video, the camera pans across the artist’s fingerprint-covered laptop on which a mountain landscape serves as desktop image. The icon of a flash drive comes into view, shown with the filename ‘TURIYA’—a proper noun adopted from a set of recordings by musician Alice Coltrane who also performed under that very moniker.

Shot entirely on Prodger’s smartphone, BRIDGIT presents the single-user technology as a prosthesis or extension of the nervous system—one which also provides an intimate connection to global social interaction and work. Body and device become extensions of each other, and the work becomes a unified meditation on shifting subjectivity.