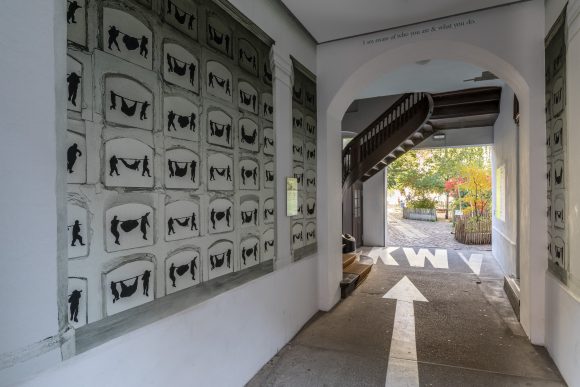 “Art says things that history cannot”. With this quote Columbian artist Beatriz González describes her work Auras anónimas (Anonymous Auras) from the year 2009, which unfolds as a mural piece on the Central Cemetery of Columbia’s capital Bogotá. For the historically charged site, which initially was conceived for the graveyards of dignitaries, presidents, and wealthy families, but with time thousands of unidentified bodies were buried, the artist conceived 9000 wall plaques. Latter are repeating the motif of the silhouettes of people carrying dead bodies, a reoccurring subject in González’ oeuvre, that is a result with the artist’s occupation with fellow citizens who had been forcibly disappeared. Auras anónimas (Anonyme Auras) therefore intends to memorize a collective history that barely is addressed in the official historiography of the country. On the occasion of the exhibition Retrospective 1965–2017 by Beatriz González at KW in the year 2018/19, a section of the Columbarium’s facade was reproduced and installed in the transitional area between the street entrance and the yard of KW.