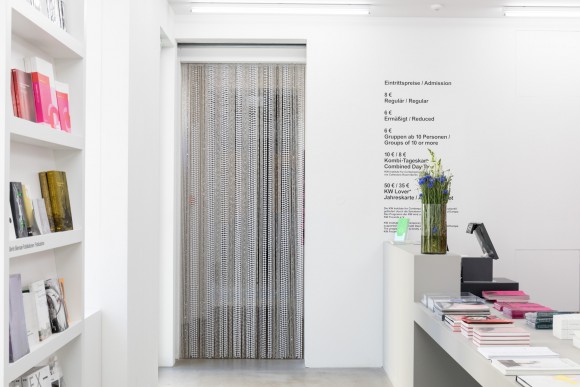 Born in Cuba, the American artist Felix Gonzalez-Torres (1957–1996) settled in New York in the late 1970s. He participated in the art collective Group Material in the 1980s, was an engaged social activist, and in a relatively short time developed a profoundly influential body of work. Gonzalez-Torres’ practice has a critical relationship to conceptual art and minimalism, and mixes political critique, human affects, and deep formal concerns.

Spanning across a wide range of media including drawings, sculptures, and public billboards, it often incorporates as a starting point ordinary objects such as clocks, mirrors, or light fixtures. In “Untitled” (Chemo), strands of white, transparent and metallic beads are displayed as a passage between two spaces and are creating a feeling of transcendence. Whereas the beads might suggest festive associations they can also be understood as admonishing illness and disease. As it is with many other Gonzalez-Torres’ works, it was conceptually important for the artist that the meaning of “Untitled” (Chemo) remained as open as possible so that a plurality of associations around it could develop over time. Gonzalez-Torres exhibited several times at KW throughout the 1990s. To underline his presence and importance to the conceptual framework of KW, “Untitled” (Chemo) will be installed from September 2017 until April 2018 in the passage leading from the new entrance to the galleries.