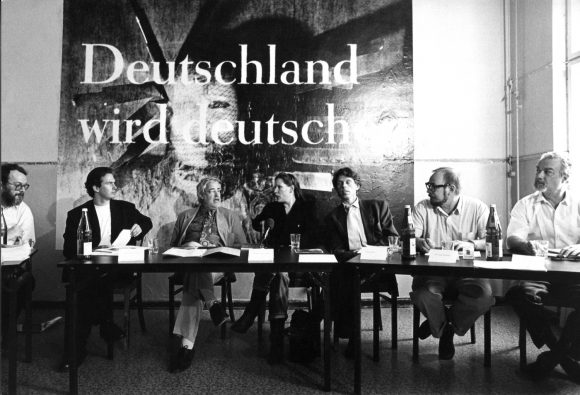 Katharina Sieverding’s billboard campaign Deutschland wird deutscher was first on view 1993 in Berlin. After the campaign’s ban from its initial exhibition in the federal state of Baden-Württemberg, the cultural scene of Berlin seized the opportunity to display Sieverding’s work in a unique presentation on more than 500 billboards, each 252 x 356 cm, throughout the German capital April 30 – May 12, 1993.

For its launch, a press conference was set at the Kunst-Werke, at that time a rather new exhibition venue for contemporary art in the Scheunenviertel in Berlin-Mitte. Here, Katharina Sieverding took a clear stand on the true meaning and purpose of her billboard campaign in the presence of Ulrich Roloff-Momin, Berlin’s then Senator for Cultural Affairs. The artist, who held an academic professorship in Berlin, found support in well-known art and cultural figures, including Wulf Herzogenrath, cultural curator at the Museum für Gegenwart in the Hamburger Bahnhof; Klaus Biesenbach, founding director of the Kunst-Werke and initiator of the poster campaign, and currently director of the Museum of Contemporary Art in Los Angeles; Veit Görner, whom together with Rudi Fuchs curated the sculpture exhibition Platzverführung for the KulturRegion Stuttgart in 1992; Jörn Merkert, the then director of the Berlinische Galerie; and Karl-Heinz Herrfurth in his function as vice president of the Berlin University of the Arts.

During their presentation, the 500 large-scale posters on display at various locations in the Berlin metropolitan area were occasionally tagged and altered—and soon became the pivot for a manifold discussion in the media and general public.

On the occasion of KW’s 30th anniversary, a re-installation of Deutschland wird deutscher will be on view from April to May 2021, both in KW’s entranceway as well as on billboards across Berlin.

From April 27 to May 6, 2021, Deutschland wird deutscher will be featured on the following billboards.