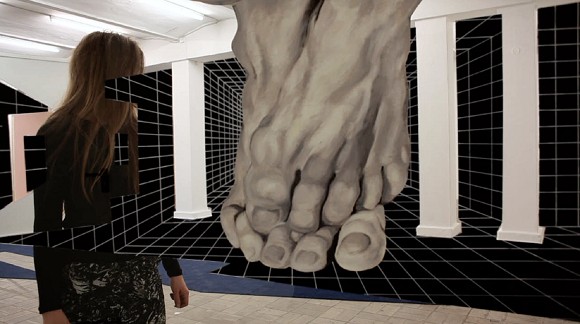 The exhibition is comprised of two complementary spaces. The first floor is transformed into an environment that is simultaneously the setting for an experimental film, shot before the exhibition opening and presented on the second floor.

Hansdóttir thus explores how each medium conditions perception: while in the installation she focuses on the space and its architecture by using objects and various surfaces, in the film she super imposes various temporal layers onto the same room with the aid of early cinematic illusion techniques. In this way, Suspension of Disbelief interweaves present and past, two-and three-dimensionality, and movement, and involves its audience directly in the process of its making.

The term "suspension of disbelief" dates back to the nineteenth century philosopher and poet Samuel Taylor Coleridge (1772 –1834). It refers to the conscious willingness to engage with – to "believe in" – an artistic fiction, so as to derive greater pleasure from it. Hansdóttir is particularly interested in the illusion techniques used in early cinema such as glass painting, in which – in contrast to the deceptively realistic special effects of today's movies – the discrepancy between reality and the fictional image is conspicuous, and nonetheless "believed". Suspension of Disbelief is the first work by Elín Hansdóttir in which the filmic experiment plays a key role. For its realization she worked in close collaboration with choreographer Margrét Bjarnadóttir, filmmaker and cameraman Frerk Lintz, and composer Úlfur Hansson.

Suspension of Disbelief is funded by Medienboard Berlin Brandenburg. With additional support from the Icelandic Visual Arts Fund, the Icelandic Art Center, the Embassy of Iceland, and the Muggur Travel Grant.