Please note that this event takes place at K, at Ebersstraße 3, 10827 Berlin-Schöneberg. 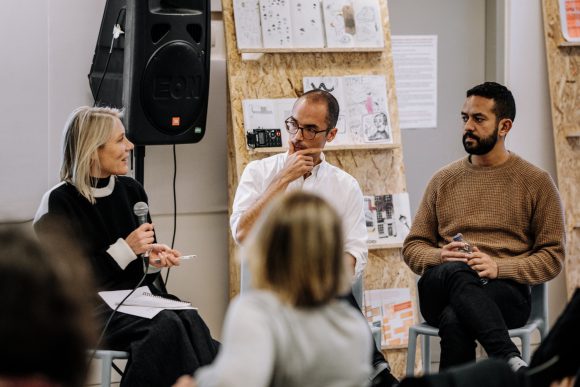 We lope along a logical “Laufbahn” in our second public program, a conversation between London-based writer and curator Emily King and P. Krishnamurth. In 2017, King, Krishnamurth, and Joasia Krysia launched Design & Empire [working title] with the Liverpool Biennial and Liverpool John Moores University. This exploratory three-day event began by locating historical and contemporary links between design and structures of power. Looking for longer-lasting lessons from Liverpool, King & Krishnamurth will collect contributions from the conference at K, to consider the project’s potential legacy and elongated life.

Emily King is a London-based curator, writer, and design historian. She has organized several major exhibitions, including a retrospective of Alan Fletcher for the London Design Museum and a touring exhibition of Richard Hollis at Centre Pompidou, Paris, and Artists Space, New York. She has edited monographs on designers including M/M (Paris) and Robert Brownjohn. In addition to contributing to a range of magazines, such as Apartamento and Fantastic Man, she has edited The Gentlewoman, and frieze.