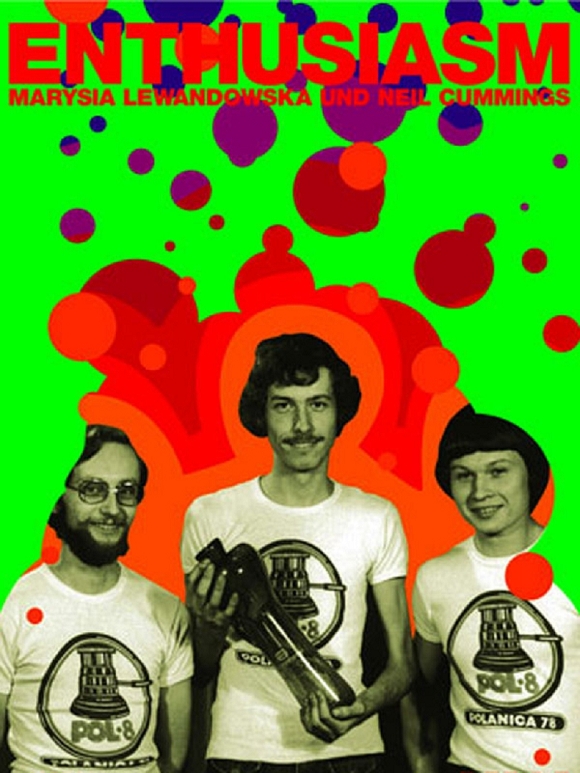 A project by Neil Cummings and Marysia Lewandowska

Enthusiasm: Films of Love, Labour and Longing is a result of over two years of research into Films produced by Poland´s amateur Film movement from the 1950s to the mid 1980s. Under socialism, "leisure" in Poland was organised through factory-sponsored clubs and associations, the most popular of which encouraged the making of 16 mm films. This exhibition explores how such amateur endeavours became an asylum for the marginalised - for dreams of happiness, love and freedom. Working outside of „official" culture, the amateur or enthusiast frequently adopts a creative counter-cultural tone of tactical resistance and criticism. The film club enthusiasts inverted the familiar logic of work and leisure, becoming truly productive when pursuing their own passions.

In the exhibition, a "reconstructed" club interior bears witness to the social and creative history of the clubs and their members. It gathers festival trophies, diplomas and badges revealing some of the aspects of this now forgotten network. A selection of the astonishing films - collated into three themes of Love, Labour and Longing - range from 2-minute animations, short "experimental" and "abstract" films and documentaries to historical dramas, features and ambitious mini-"epics".

The Love section reflects the joy of everyday life, with themes of sexual desire, glamour, childhood tenderness and humour. The films in Labour depict the various spaces of production; heroic physical work, pointless labour, bureaucracy and even the work of filmmaking itself. The films in Longing explore personal, political and sexual longing via themes of partying, seductive consumerism and political satire. Creating three separate cinema spaces solely out of richly coloured velvet fabric enhances the sensual experience of the films. An "Archive Lounge" provides access to a growing archive of films gathered by the artists but not featured in the main body of the exhibition. The visitors are encouraged to "curate" their own programme out of the material.

The exhibition celebrates the films of the hundreds of ordinary people whose enthusiasm for film was both an outlet and a forgotten cultural resource.