The Erotics of Infrastructure:
Indebted Vision 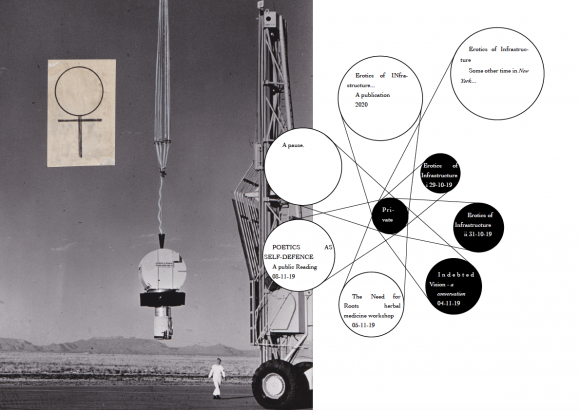 “The subjective achievements neoliberalism had promised (“everyone a shareholder, everyone an owner, everyone an entrepreneur”) have plunged us into the existential condition of the indebted man, at once responsible and guilty for his particular fate.”

“Debt constitutes the ground for constructing citizenship and subjectivity. Given its ability to constitute our social body, via economies, how does this affect our sense of vision? Shot through our senses, desire drives perception. With Western culture’s primacy on vision how does the figure of the ‘indebted man’ intersect with accumulation’s salient organ, the eyeball? Could our vision be considered in indenture to a larger system of debt structured by bondage through legal arrangements and ‘life taxes’?”

Drawing on individual personal reference material, artists Inka Meissner and Rachal Bradley discuss the operation of indebted vision, proceeding from central thoughts presented in Maurizio Lazzarato’s The Making of the Indebted Man (2012) but associatively extending it to the context of visual arts. Given the power of the debtor-creditor relationship to affect individuality and subjectivization and to produce a specific morality of life-long indebtedness, Meissner and Bradley, through the discursive model of the ‘conversation’, present examples of how our vision, both as a physical and as projective thinking, is deeply molded by such an atemporal condition. The question beckons of the potentiality of the recuperative properties within visual art to assuage such a condition.

Inka Meißner is an artist living and working in Berlin. Her work manifests itself in different artistic and theoretical formats and collaborations. Current projects look at questions around the migration of violence through alleged fictional and real media such as literature, art, currencies, and people.

The Erotics of Infrastructure:
Poetics as Self Defence
8 November 19, 8 pm