The Erotics of Infrastructure:
Seminar Part I 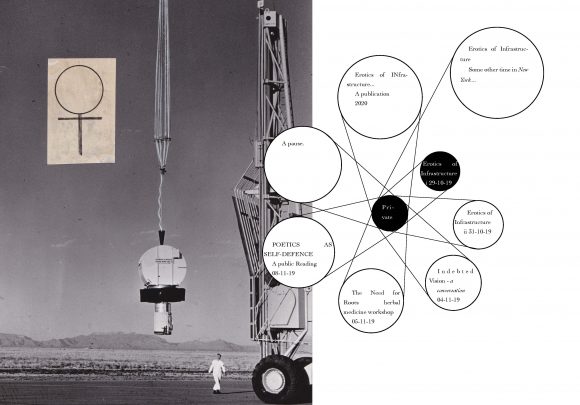 This first event, organized as a one-day workshop, invites a closed group of artists, writers, curators, activists, employees of KW and theorists to present research material on and around infrastructure that will provide a basis of discussion for the following four public events. For the different contributors, this will take various forms; from artworks and moving image to the provision of utilities and models for social organization. Infrastructure is being addressed from positions and practices operating through and concerned with language, writing, art, architecture, technology, biology, ethics and social activism.

Rosa Aiello is an artist working with video, computer generated imagery and text, often looking at the way language, narrative devices, domestic architecture and other structural parameters are involved in processes of socialization.

Gerry Bibby is an artist and writer living in Berlin.

Timothy Davies’ art practice operates through inter-textual relations, matchmaking unprecedented conjugations between found and slightly modified objects, motifs and images. It does not so much present new information as point to the contingencies of what is seemingly “given”.

Parr Wei Geng is a biochemist-turned artist and researcher whose interests span from interspecies communication and synthetic biology to the uncanny cognitive dissonance caused by encounters between “Metis” and “Techne”.

Laurie Rojas is an art critic and Senior Editor at Spike Art Magazine, Berlin. Her writing has appeared in The Art Newspaper, Artsy, Artnet, Arts of the Working Class, Caesura, focusing, among others, on socially-engaged art, ambivalence in artworks, art criticism after its eclipse, and questions of social emancipation.

The Erotics of Infrastructure:
The Need for Roots
5&nbspNovember&nbsp19, 11 am–5&nbsppm

The Erotics of Infrastructure:
Poetics as Self Defence
8 November&nbsp19, 8&nbsppm