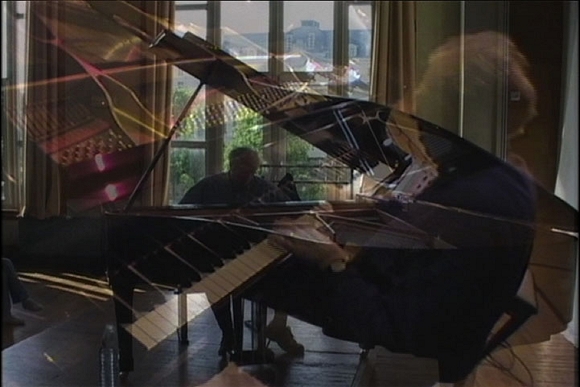 With Reverberlin Michael Snow presents one of his latest filmic productions at KW Institute for Contemporary Art in Berlin. Thus, the experimental filmmaker returns to the origin of his fim. On June 27, 2002, he played live at KW with his band CCMC (Paul Dutton: soundsinging, harmonica; John Oswald: alto saxophon, saxovoice; Michael Snow: piano, radio). From the filmic recording he freely composed a visual concert. Only the music is un-edited, un-modified, as-it-was-played.

Michael Snow (born 1929 in Toronto, Canada) is one of the most highly acclaimed experimental filmmakers of our time. Besides, he is a musician, visual artist, composer, writer, and sculptor.

With support of the Embassy of Canada, Berlin