On handling a curatorial estate 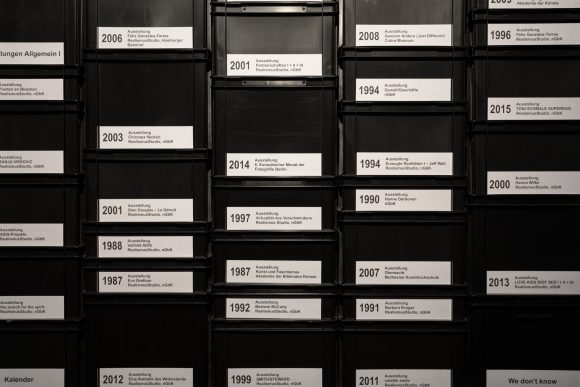 Frank Wagner—an important and tireless protagonist of Berlin’s art and culture scene with an extremely far-reaching international network—worked at numerous institutions as an independent curator. He worked with many artists in the course of his unfailingly critical exhibition projects; their relationship was often much more than a mere professional collaboration.

The question “What remains…?” concerns the handling of his curatorial estate in both the material and immaterial sense. The attempt to give an overview of his curatorial work leads to the unfolding of a rhizomatic structure composed of many participants, artistic works, and other legacies from the curatorial context whose meaning and value is difficult to determine. What remains after the end of an exhibition? How does a curator’s life work manifest itself in comparison to an artistic work? Which peculiarities and difficulties arise in handling what has accumulated? Which (dis)arrangements, classifications, meanings, interpretations, and relationships can beproduced? How much of this can be represented and/or can/is able to become visible? The event takes Frank Wagner’s estate as its point of departure and also raises these issues in other contexts.

WAS BLEIBT / WHAT REMAINS …? is part of TIES, TALES AND TRACES. Dedicated to Frank Wagner, Independent Curator (1958–2016). The exhibition is curated by the RealismusStudio of the neue Gesellschaft für bildende Kunst (nGbK) in collaboration with Between Bridges. The RealismusStudio consists of Christin Lahr, Isabelle Meiffert, Ulrike Riebel, Vincent Schier, and Susanne Weiß. The complementary exhibition at the project space Between Bridges will be curated by Wolfgang Tillmans and Eugen Ivan Bergmann (February 1–March 16, 2019).

Followed by: Chats and Drinks at Stonewall-Inn Bar