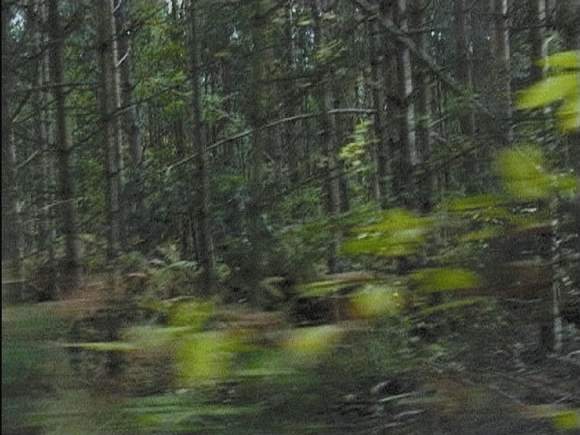 The KW Institute for Contemporary Art is pleased to present the first comprehensive one-man-show of the Berlin and Los Angeles based artist Heike Baranowsky. Alongside works from her entire career, the exhibition focuses above all on Baranowsky's more recent works, like Der Radfahrer (Hase und Igel) [The Cyclist (Hare and Hedgehog)] (2000), parallax (1999) and the new video installation Mondfahrt 2001 [Moon-Tour 2001], shown here for the first time.

Baranowsky's works lengthen, condense, mirror and dissect the successions of time and spatial relationships. Employing digital procedures, Baranowsky explores space through the changing of perspectives and through the manipulation of the narrative pace of her works. Whether the camera is moving along the motif, or whether the motif is passing by the fixated lens, Baranowsky's uninterrupted loops of movement raise the spectators sensitivity towards his or her own mechanism of perception. For example, in the early work en face II (1995) the camera seems to have been driven along the windows of an apparently endless facade of a skyscraper. Only the complete motionlessness of the people appearing behind the windows unveils that the work is based on a series of photographs and not on a film. In her works Heike Baranowsky creates situations, which are on the borderline of the experienced, the imagined and the remembered.

"Attention to the fourth dimension of time and space is always paramount in Heike Baranowsky's video installations. In earlier works Baranowsky tended to draw the audience into her elongations of the rhythms of time and the dimensions of space, manipulating our perception of time and of spatial orientation in relation to both the material and the psychological realms. In more recent works a contrasting sensation of compression is explored. Dealing not only with the visual realm but with what phenomenologists would refer to as the "lived-body" .... Baranowsky works at the intersection between structures of human consciousness, or that which is perceived, remembered, dreamt or imagined, and the "real", or that which is solid or quantifiable." (Heidi Fichtner, KW Magazine 03.01)

For example, the video triptych Radfahrer (Hase und Igel) [The Cyclist (Hare and Hedgehog)], 2000, features the same sequence of cyclists speeding along a racing track. Due to the variation of speed within each projections - from 20% and 10% reductions in the left and middle ones to the real tempo in the right-hand projection - it seems as if the cyclists of each sequence is overtaking the one ahead of him, who - due to his slower motion - appears to fall back. While the former comes closer, beginning to superimpose his silhouette over the latter, the latter is slipping out of the projection and out of sight. This moving ahead and falling back of the cyclists plays with the spectator's expectation regarding space and time: the instant the cyclists almost overlap, the spectator envisions the moment of the overtaking, although it never happens in the Video itself.

Baranowsky's new work Mondfahrt 2001 [Moon-Tour 2001], presented here for the first time, was made during a ferry passage from Harwich to Hamburg. Taken by night, Baranowsky filmed the full-moon holding the camera as steady as possible, manipulating the video only by framing the moon into a limited space. Due to the movement of the boat on the waves, the moon becomes a ball-like, rhythmically moving disc. The black and white of the image as well as the lack of any spatial indicators enhance the two-dimensionality of the work. Baranowsky plays with the expectations and experiences of the spectator.

Heike Baranowsky (*1966, Augsburg) lives and works in Berlin and Los Angeles. Her works were exhibited a. o. at the Frankfurter Kunstverein (1997), the P.S.1 (New York, 1997), the galleries Barbara Weiss Berlin (1998/2000) and Entwistle London (1999) and at the SFMOMA (San Francisco, 2001). The artist has been awarded with the Eberhard-Roters Prize (2000) and the Prize of the DG Bank (1996). 2000 she has won the foreign stipendium of the Berliner Senat für Kulturelle Angelegenheiten. Until September 2001 Heike Baranowsky has had her studio at the Kunst-Werke Berlin.