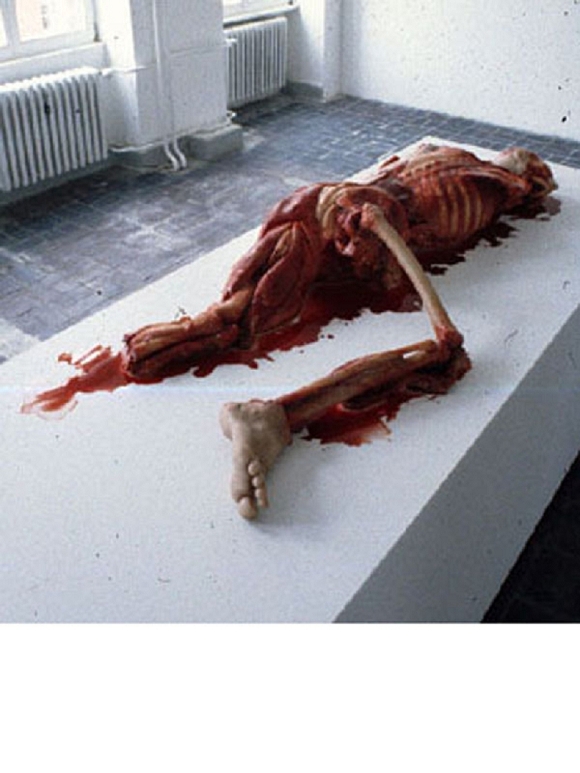 “I try to provoke a quick response from the viewer, an emotive ‘knee jerk’ in the hope of fleetingly bridging the gap between the informed and emotional. Ideally the work is understood before the need to understand it arises, once this moment of conceptual justification occurs then the work closes to the viewer, it is no longer a window to another place but a mirror.”

The new work A necessary Change of Heart produced in association with Art & Public contains what appears to be some kind of murder victim or human sacrifice, presented here in the form of a self portrait. Dissected beyond the point of recognition the sculpture of an incomplete body is based on the 17th century anatomical waxes of the Museo La Specola in Florence.

Central to the work, the concept of anatomy and dissection forms a complex and purposefully sensationalized metaphor of the way in which not just science but institutions as a whole investigate and formulate their "world view" – which is effectively the same for all human thought and activity–at least all aspects of cognition.

The form of the figure and the accompanying film image of a tropical beach represent two opposing romantic visual clichés, one horrific in its nature the other utopian. If the eviscerated body appears like an uninhabited ruin, then the deserted paradise of the film is a seductively empty space of projected fantasy, an overwhelming desire to fall in love. The sculpture and video are sites of physical and mental colonization, seen from the a-historical perspective of the outsider.

A necessary Change of Heart has been produced in co-operation with Art & Public, Geneva.