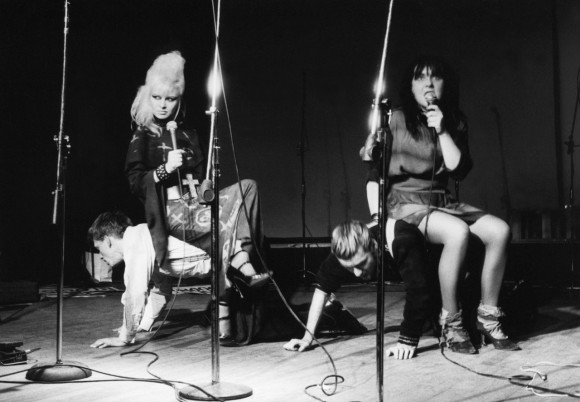 Die Tödliche Doris (1984) in New York, US with Tabea Blumenschein

The term Geniale Dilletanten (Genius Dilletants) was created in 1981 and derives its strange spelling from the kitchen herb dill. On September 4,1981, a new type of music was introduced at the “Große Untergangsshow” (Great Demise Show) at the Tempodrom at Potsdamer Platz, Berlin. It was the result of a perennial development project by musicians that felt simply bored listening to popular rock music. Groups like Die Einstürzenden Neubauten and Die Tödliche Doris played in front of a big audience for the first time.

Käthe Kruse was born on September 10, 1958 in Bünde, DE. From 1982 to 1987, she was a member of the group Die Tödliche Doris, in which she played the drums. Today, Kruse is an artist and musician in Berlin. She has covered her drums in leather and altered it visually and acoustically. Her daughter Edda Kruse Rosset plays the drums, while Kruse is singing in her leather costume.

The program of The Berlin Sessions in May 2017 is a collaboration of KW Institute for Contemporary Art and Berlinischen Galerie – Landesmuseum für Moderne Kunst, Fotografie und Architektur.