Available online from April 15 until May 24, 21
In English and Portuguese 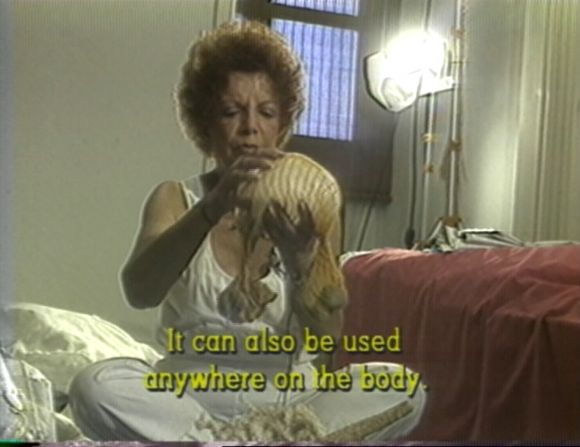 Image: Still from Memória do Corpo (Memory of the Body), 1984, directed by Mario Carneiro, Brazil; Courtesy The World of Lygia Clark Cultural Association

On Film: Hélio Oiticica, Lygia Clark and Arthur Bispo do Rosário brings together a unique selection of films about and/or by these three artists who have played a defining role in the Brazilian art scene from the 1960s onwards. Each to their own extent — intended or not — contributed to discourses moving away from modernist artistic traditions, by embracing subjectivity, sensuality, color and poetic feelings in their work. Such approaches resonate in the work of Leonilson, who belonged to a younger generation of artists. In general, the groundbreaking practices of Oiticica, Clark and Bispo do Rosário did not lose significance until this day.

Apocalipopótese was a collective exhibition as manifesto, which took place in the Aterro do Flamengo park in Rio de Janeiro in 1968. Literally breaking away from the limitations and categories of museums, the manifestation became an important moment to show the desire of a young generation of artists to shift the focus from working with institutional constraints to practices characterized by action, experience, process and participation, intervening in the public sphere.

The fragments left of the full 16mm film show among others Lygia Pape’s Ovos (Eggs), Antonio Manuel’s Urnas quentes (Hot urns), and Rogério Duarte’s taming wheel of trained police dogs. The film ultimately shows a new movement in the Brazilian art scene of the 1960s, of which Hélio Oiticica and Lygia Clark were driving forces.

With Agrippina é Roma-Manhattan, Hélio Oiticica (Brazil, 1937—1980) translates the story of Agrippina—the widowed aristocrat determined to install her son Nero as the Roman emperor by arranging the right marriage for herself—to New York City in the 1970s. Dressed in a blood-red dress, Agrippina promenades in front of the solemn neo-classical architecture of Manhattan guided by a B-cast pimp. Followed by a scene in which a drag queen is playing dice on the streets the film can be read as homage to New York’s cityscape and the outlaws ruling the streets—played by Mario Montez, Antonio Diaz and Cristiny Nazareth.

The film illustrates the term quasi-cinema coined by Oiticica and d’Almeida, which questions the passive relationship between the cinematic image and the spectator, and presents a blending of pop culture, social issues, film and sound.

Arthur Bispo do Rosário (Brazil, 1909—1989) was an outsider artist who lived as a psychiatric patient in a mental health institution in Rio de Janeiro for 50 years. He created collages, sculptures, installations and cloths with objects found in his daily surroundings. Made in complete isolation from the art world, these objects were rather an expression of his self-proclaimed divine mission than intentional pieces of art. They visualize a mind oscillating between reality and delirium, and represent how a work can encompass one’s entire world-view, regardless of its tangible dimensions.

Changes in quality may be visible in the film, because it concerns a montage of digital copies of a lost original.

Lygia Clark (Brazil, 1920—1988), who started as a painter and sculptor, was part of the Brazilian Neo-Concrete group of artists, who declared with a manifesto in 1959 to perceive an artwork rather as a quasi-corpus than as a ‘machine’ or an ‘object’. They and embraced the subjective experience of both the artist and the viewer. Although Clark would withdraw from the group shortly after, she dedicated her life-long practice to question objecthood and to explore how one can relate to works of art, among others by making participatory propositions and collective body experiments.

Memória do Corpo (Memory of the Body) is one of the few videos featuring Clark, in a session of Estruturação do Self (Structuration of the Self). From 1979—1988, she identified the relational capacity of materials to create her Objetos relacionais (Relational objects), with which she would develop therapeutic sessions to replace art by a practice of aesthetic healing. With this approach, Clark undid the categorized and hierarchical relationship between materials, objects and individuals, to come to an artistic practice rooted in the senses.