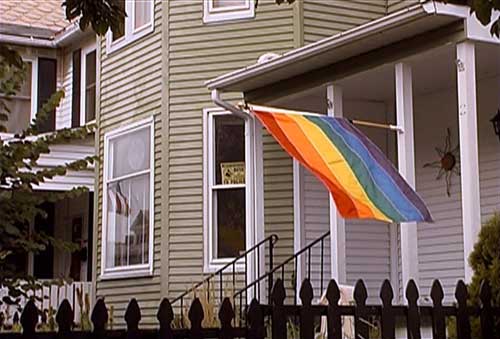 A made-for-television documentary by Linda Goode Bryant and Laura Poitras, Flag Wars (2003) was shot over a four-year period in Columbus, Ohio, at a point when white homebuyers were moving into a black, working-class neighborhood. The film documents interpersonal conflicts between different ideas of cultural heritage and freedom of choice and demonstrates the decisive roles of class and racial privilege. The picture is further complicated by the new neighbors identifying as gay and lesbian.

Flag Wars has been consistently described as exposing prejudice on “both sides,” which is undoubtedly true. Yet the film’s perspective is still worthy of debate. A sharp, no-frills documentary that sidesteps the usual TV tropes of urban dispossession, Flag Wars is by equal turns polemical and understated, ambitious and at times unnerving. Its portrayal of the victims of urban redevelopment—or any potential solidarity between them—is couched in a structural analysis that includes micropolitical detail and broader historical developments.

This edition of Lichtspiele is host to REALTY, a long-term KW program of artist commissions and public events, organized by Associate Curator Tirdad Zolghadr.