Michel Majerus – Early Works uncovers the first layers of Michel Majerus’ (1967–2002, LUX) artistic practice, showing over 80 works he created between 1990 and 1996. Curated by Krist Gruijthuijsen, the exhibition at KW Institute for Contemporary Art includes many pieces that have not been exhibited ever before and are yet to be art historically positioned within the artist’s larger body of work. As such it is a first public attempt of an overview of the early stages of Majerus’ practice prior to his international breakthrough, which was marked by his 1996 solo exhibition at Kunsthalle Basel.

Twenty years after his sudden death, Michel Majerus – Early Works is part of a major tribute to Majerus taking place all over the city of Berlin as well as Germany and Luxembourg. The program highlights the late artist’s influence both on his peers as well as the generations succeeding him, by exhibiting both his reflections on painting as a medium and his groundbreaking vision of a world in which popular culture, advertisement, and the virtual realms of TV, videogames, and computers infiltrate the very essence of everyday life —a process that is only intensified by the developments in the digital realm.

Referencing the work of distinguished artists of previous generations, their reflections and strategies, Majerus was continuously shifting back and forth between historical, mundane, and contemporary imagery. By sampling fragments, creating series, embodying speed, and referring to the challenging statements made by his predecessors, Majerus’ practice is characterized by continuous and unmitigated observations of surface and space – both physical and virtual – which he used to reflect on the meaning and power of visual culture at large. 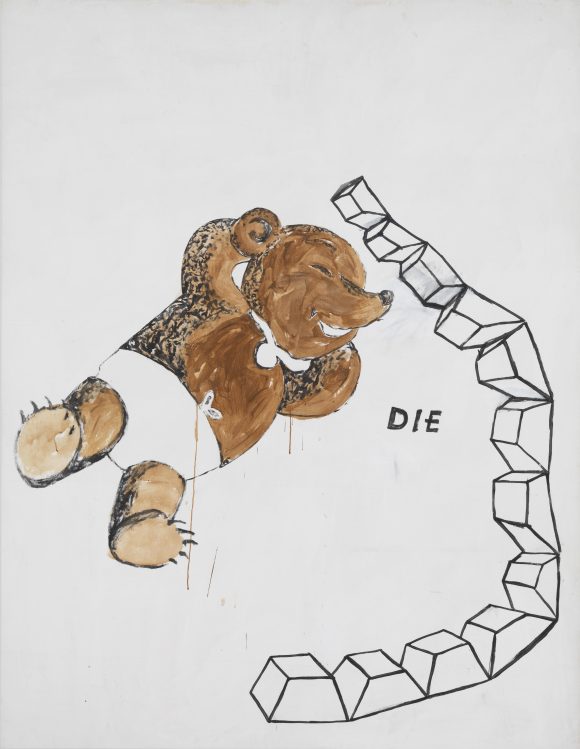 In 1986, Michel Majerus started his artistic education at the Staatliche Akademie der bildenden Künste in Stuttgart, first as a student in K.R.H. Sonderborg’s painting class, and, in 1991, moved to the class of Joseph Kosuth to finish his studies one year later. The practices of the two established artists would have a profound influence on Majerus’ work throughout his career.

In 1992, together with his fellow students from Stuttgart Nader (Ahriman), Stephan Jung, Susa Reinhardt and Wawa (Wawrzyniec) Tokarski, Majerus co-founded the artist group 3K-NH for which they used the initials of their nicknames to form a cryptic code name. During its two-year lifespan, the group declared a need “to expose the uselessness of communication in general, and of advertising and art in particular” as well as to “embody the threat that the average person is not exposed to, but which he needs as a basis for his existence” (statement by 3K-NH, exhibition catalogue, Stuttgart 1992/1993). In the year after Majerus moved to Berlin into an apartment with Stephan Jung on Linienstrasse, a derelict street in the city center. Although dilapidated and socio-economically challenged, the city held a promising future after the fall of the Iron Curtain. 3K-NH held exhibitions both in Stuttgart and Berlin.

For his own artistic practice, Majerus continued to draw on the eclectic pop imagery and nihilistic thinking that had already influenced the group, combining them with a juvenile approach to rebelling against his bourgeois upbringing as well as a means of institutional and artistic critique. Although the addressee of the statement remains unclear, this approach can be found in the work Untitled (1993), for example, which includes the phrases “loss of self-confidence / lack of culture.” The work eins, zwei, drei (1992) also features nihilist thought, in this case in relation to his country of birth. The details of his criticism, however, remain opaque. Exhibiting a penchant for making connections and networking, the ambitious young artist then became affiliated with the newly opened gallery neugerriemschneider, where he held his first exhibition in 1994. Using two canvases to increase the scale of the work, der weg vom atelier zur galerie (1994) does not only capture that achievement but also stylistically references Frank Stella, one of the artists Majerus admired and whose working technique he studied and sampled over and over again. 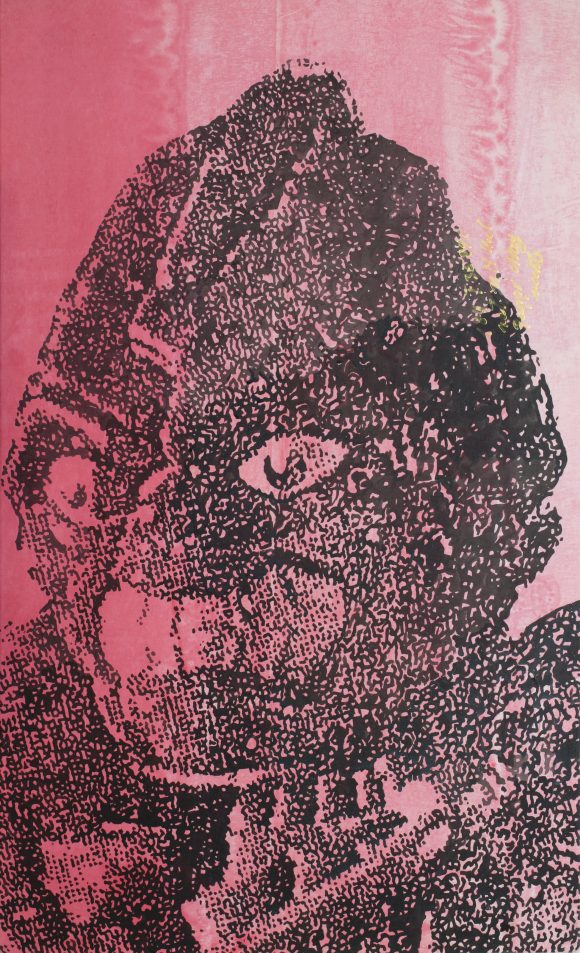 Painting was Majerus’ medium of choice but only to question and stretch the confines of the medium as well as its present position, be it in relation to his art historical predecessors, his contemporaries, and to the larger visual culture of the time. His creative and inspirational horizons expanded to include many aspects of popular culture from computer games, digital imagery, film, television, and pop music, to trademarks, corporate logos, and text. Further, his work showed an appreciation of the 20th century history of painting, referencing the work and artistic methodology of a multitude of (exclusively male) artists, including Andy Warhol, Frank Stella, Gerhard Richter, Jean-Michel Basquiat, Julian Schnabel, Mark Rothko, Sigmar Polke, Willem de Kooning, as well as his mentors Kosuth and Sonderborg.

In general, the earlier works exhibited at KW reveal the first strands of a young but highly productive artist, eager to enter the art market and seeking his signature style by engaging in technical, visual, and conceptual experiments. Many of the countless techniques and motifs he used during these years reoccur throughout his oeuvre, sometimes emphasized in the shape of an interest in a particular subject, other times by deliberately exaggerating an image to lay bare the banality of modern capitalist society and the hollowness of its visual culture.

Specifically, the works in these rooms constitute the very first silk screen experiments Majerus had been undertaking. In the same reproductive vein as this technique, he borrows and reproduces existing images of the Roman figure Lucretia, the rock star Mick Jagger, the Disney version of Alice in Wonderland, but also robot monsters, poodles, or horses. The use of the face of Mr. Muscle, a universally recognized brand of cleaning products, can be linked to a symbolic dimension of cleanness and explicit clinical activities and diseases in other works, which may also be seen as instances of rebellion against bourgeois society and its way of life. His archive contained endless collections of magazines, newspapers, and encyclopedic cutouts, many of which were sampled in his works.

Some of the works from the early 1990s were made with fabric instead of the traditional stretched canvases typically used by painters due to financial constraints. Majerus used to buy smaller fabric pieces and sew them together to eventually produce one larger piece. In later works, he would apply a comparable method by using multiple canvases and hang them adjacent to each other to create a singular, large-scale work. 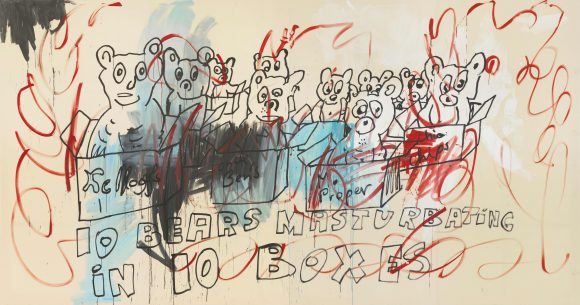 Through experimentation and production, Michel Majerus attempted to comprehend the materials, the techniques, and the symbols with which he could work. Presented here are small-format works, by Majerus’ standards, which vary widely in terms of painterly materiality—from oil on wood, to offset on canvas, to a unique coloring book. The variation and sheer quantity of his works raise questions on authenticity, seriality, and hierarchy in relation to images and their carriers. The eclectic collection of depicted figures and motifs is borrowed from an equally multitudinous number of sources, including Sesame Street, Beavis and Butthead, Max and Moritz, Smarties wrapping paper, and a board game version Sandmännchen, the much-loved puppet from East German children’s television.

Oblatenschachtel (1992) is a singular experiment Majerus conducted for the creation of an edition. The work contains images referencing the painting Maria als Schmerzensmutter (1495/98) by Albrecht Dürer, which are set on top of the packaging of sacramental bread. On the inside are images of the Ludwig Museum in Cologne and the Solomon R. Guggenheim Museum in NYC, among others, printed on such bread. The work seemingly reflects on the functioning of the art market and the institutional sphere—and on Majerus’ subjective position in relation to these dimensions of the art world. Next to the edition are cutouts, sketches, and slides for overhead projectors that Majerus would use to prepare new pieces. The cartoon cat appears in the weisses Bild (1994) work that is exhibited in KW’s main hall.

KW’s main hall is dedicated to the larger works of Michel Majerus, which were created later in this early stage of his career. They make evident the extent to which he embraced a monumental scale as an artistic method. By doing so, he was likely referencing the scale of billboards as an attempt to represent the invasiveness of popular culture under capitalism in times of accelerating technological innovation. Working on such a scale, he challenged not only himself as a painter but also the spatial capacities of art spaces and institutions. Some works remain iconoclastic, like Fuck (1992), and continue to reflect on the position of today’s painter and his medium. Consider, for example, the white planes of Untitled (year unknown) and Untitled (1994) exhibited on the scaffolding. Works from this stage also become more layered and complex in terms of style references and technique like 10 bears masturbating in 10 boxes (1992) and weisses Bild (1994).

Industrieboden (1996/2022), a site-specific work, was first created at a 1996 exhibition at Kunsthalle Basel, curated by Peter Pakesch, that became Majerus’ international breakthrough. At the time it was one of Majerus’ most ambitious attempts to challenge the two-dimensionality of the painterly surface and integrate the spatiality of the exhibition space into his work. The young artist would continue to focus on this tension later on.

In 1999, at the invitation of curator Harald Szeemann, Majerus solidified his European reputation by painting the façade of the international pavilion in the Giardini of the Venice Biennale. In 2002, shortly after his return from a residency year in Los Angeles, USA, to Berlin, he put up Sozialpalast, his defining public artwork, for which he covered the face of Brandenburg Gate with in an 1:1 image of the Pallasseum in Berlin Schöneberg. The Brutalist social housing block was once built as a new approach to urban life but had become virtually synonymous with high crime and urban decay by the turn of the millennium. On November 6, 2002, Majerus’ life was suddenly ended by a tragic plane crash on a flight from Berlin to Luxemburg. 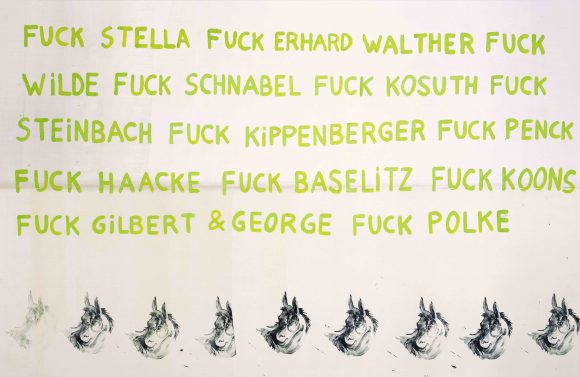 Simultaneously to Michel Majerus – Early Works at KW, Neuer Berliner Kunstverein (n.b.k.), Kunstverein in Hamburg, Michel Majerus Estate, and the gallery neugerriemschneider in Berlin, will further explore Michel Majerus’ oeuvre in all its complexity and on an unprecedented scale. In parallel with these exhibitions in Berlin and Hamburg, multiple renowned art institutions across Germany and Luxembourg will present works by Michel Majerus from their collections, including Ludwig Forum Aachen, Kunsthalle Bielefeld, Kunstmuseum Bonn, Museum Folkwang in Essen, Sprengel Museum Hannover, Museum Ludwig in Cologne, Kunsthalle Mannheim, Städtische Galerie im Lenbachhaus in Munich, Neue Museum Nürnberg, Saarlandmuseum – Moderne Galerie in Saarbrücken, Kunstmuseum Stuttgart, Staatsgalerie Stuttgart and Kunstmuseum Wolfsburg as well as the Musée d’Art Moderne Grand-Duc Jeans in Luxembourg.The collaboration between institutions strengthens the visibility of Majerus’ artistic influence and demonstrates the rootedness of his practice in Germany and Luxembourg’s art discourse. In 2023, a comprehensive publication regarding this series of exhibitions will be released. 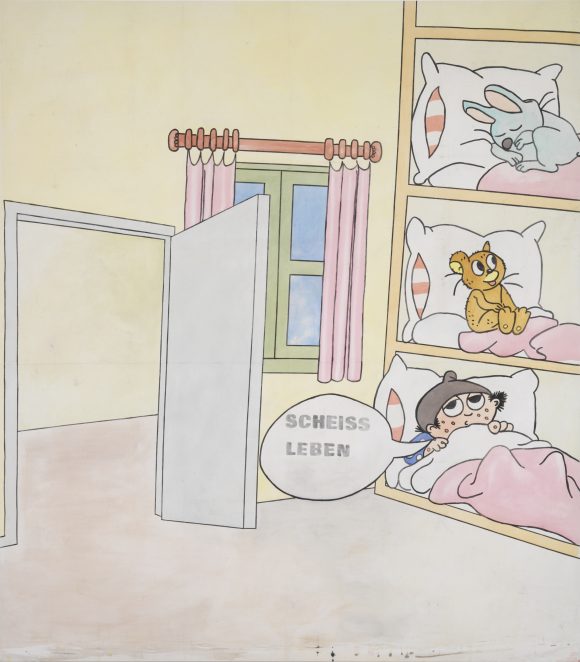 The exhibitions on Michel Majerus at KW and at n.b.k. are supported by Haupstadtkulturfonds Berlin.