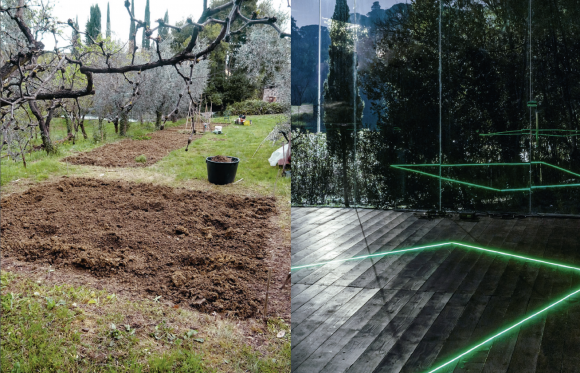 The house of artists Villa Romana in Florence is surrounded by one and a half hectares of land. Over the past ten years, the architecture landscape-studio atelier le balto has reinterpreted the garden laid out there at the end of the 20th century in a processual way and with multiple collaborators.

The Non Garden Book Villa Romana wants to reproduce the line of actions in pictures giving the so-called garden materiality and temporality. It is an illustrated book that also contains numerous contributions and interventions by Villa Romana prizewinners.

By viewing the pictures and drawings, it becomes clear that the garden is a space to take action within the time. The work of atelier le balto went from the original vegetation and territorial zones, to turn them into open physical and visual dynamics: to the beholder; to the user, to the imagination, to the neighborhood inside and outside the property, to the limitations of the terrain and the change of seasons. The work always remains as unfinished, thus the natural growth respects no boundaries.

The book presentation will be accompanied by film screenings by Alvaro Urbano, Sophie Reinhold/Linda Spjut and Magda Typiak.