This is an all gender inclusive event. 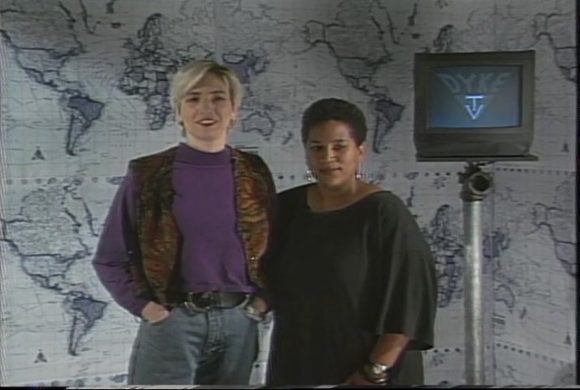 You’re watching Dyke TV, television to incite, subvert, organize, and provoke – the opening line of the first show of Dyke TV, a 1993–2005 TV broadcast show from, by, and for lesbians and LBTQI communities. At peak times, it was distributed on 78 public access channels throughout the United States. Founded by Ana Maria Simo, Linda Chapman, and Mary Patierno, and based out of New York City, Dyke TV was produced through the voluntary collaborative labor of a network of hundreds of collaborators, seeking to increase visibility of lesbian history, daily life, activism, and international LGBTQI issues. Following a DIY approach, Dyke TV encouraged „every lesbian to pick up a video camera and aim.” Among the early collaborators and guests were many celebreated artists of the time and some who would only later become known to a wider mainstream audience, including Pamela Sneed, Cheryl Dunye, Nicole Eisenman, Sarah Schulman, Yvonne Rainer, Su Friedrich, Barbara Hammer, Ellen Cantor, and Dorothy Allison.

Dyke TV’s diverse topics range from the murder of Brandon Teena, the latest Madonna sex gossip, to the everyday joys and sorrows of gay cowgirls, immigrants, athletes, officers and artists. The approximately 30-minute magazine-style shows included regular segments such as Lesbian Health, Workplace, Eyewitness, Sports, Arts, and audience favorite I Was A Lesbian Child, in which personal coming out and coming of age-stories of lesbian identity are told based on childhood photo albums.

The screening presents a selection of best of-segments from the first two years (1993-1994), focusing on programs with and about artists such as Nicole Eisenman, Sarah Schulman and Dorothy Allison.

The screening will be followed by a Skype conversation with Dyke TV co-founders Mary Patierno and Linda Chapman, Berlin based artist and DJ Neda Sanai, and KW’s Assistant Curator Kathrin Bentele.

Special thanks to Ainara Tiefenthäler und Mary Patierno for making Dyke TV’s video archive accessible and for pulling the clips.