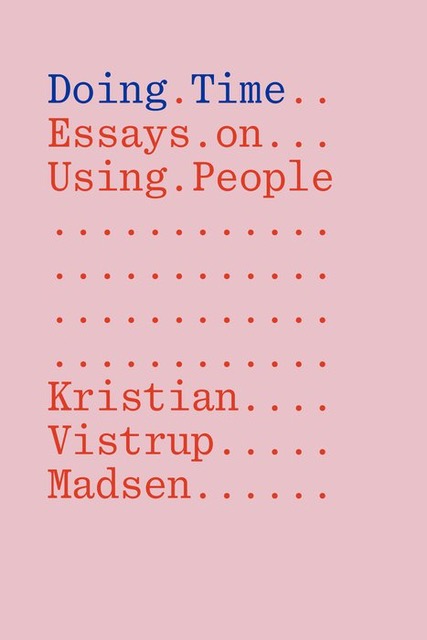 For the launch of Doing Time: Essays on Using People (Floating Opera Press) by Kristian Vistrup Madsen, the Pogo Bar hosts a conversation between the author and Kate Brown, European editor at Artnet, in KW’s courtyard. Doing Time collects never previously published essays from 2016-20 by the Berlin-based art critic, reflecting on the place of politics in art, and the responsibility of a writer to their subject. The conversation will be followed by a DJ-set by Bitsy Knox.

Doing Time: Essays on Using People
To write about someone else means both to expose and transform them. This is the dilemma of writing that Janet Malcolm describes as “morally indefensible.” In Doing Time, Vistrup Madsen deliberates on his correspondence with an inmate in a California prison named Michael. Over several years, this spawns a series of reflections about the politics of solidarity and appropriation, but also about writing itself and what happens when life is turned into art. This book is a portrait of a friendship interpolated by great difference, and of a fearful time in which experience and identity are everything, and thinking not enough.

“The first few letters on my part were punctuated by hesitancy, a dutiful respect for the difference between us: that I couldn’t possibly understand, or even with the moral implication that I oughtn’t. Heavy with sarcasm, I wrote to Michael in prison: ‘Meanwhile, I am working in an art gallery. We sit in a room full of MacBook Airs in minimalist outfits and talk about the migrant crisis.’ But he had written nothing to warrant such pleas for reassurance. My respect for difference, then, was not the same as respect for Michael, but rather a way of excusing my own position, working through my own guilt.”