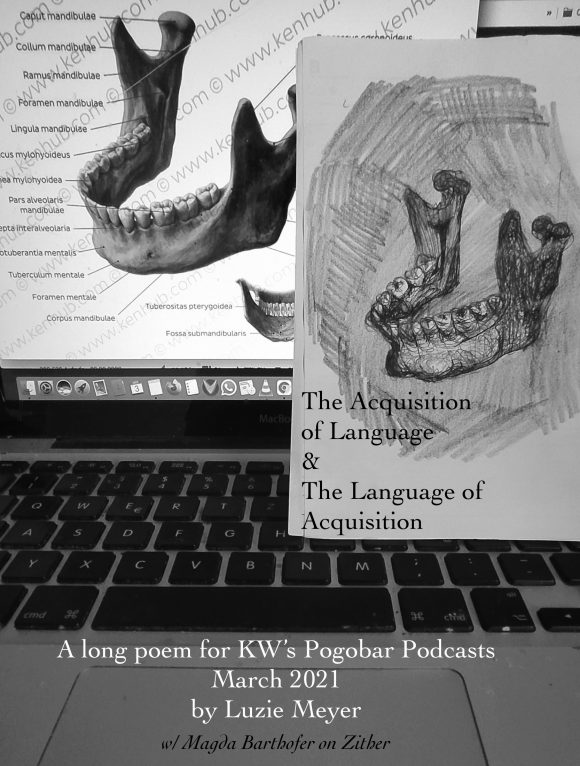 In The Acquisition of Language & The Language of Acquisition, artist-poet Luzie Meyer traces the property of language to both confine and liberate, and the verbal means of expression available to us in times of digital media and algorithms. With the faculty of being able to express oneself through these forms (templates) comes the problem of false equivalence or commensurability: Unlike the spider that mechanically reproduces the same pattern again and again, The Acquisition of Language & The Language of Acquisition explores the gaps and interstices in which such tools and formats might possibly be used for different and poetic ends.

The long poem reads as a succession of “exercises” (chapters) and addresses the intricate entanglement between the individual and the universal, or the authentic and the socially constructed. Blending sound (among which are zither pieces of her friend Magda Barthofer, or composition techniques borrowed from musique concrète) with writing techniques such as cut-up, Meyer investigates the psychology of language forms and formats. As the narrator of the poem finds themself looking for a different and individualized alphabet, the use of an all-too-familiar language of therapy and self-enhancement reveals it as yet again firmly merging with the logic of neoliberal value and exchange.

The spoken word is accompanied and interrupted by musical interludes. The musique concrète compositions are created with a drum rack of original percussion sounds recorded at home, as well as with a ready-made set of sounds from Ableton. Additionally, the piece includes sounds of a lapharp (zither), played by Magdalena Barthofer, which were recorded with Ableton with an effects pedal.