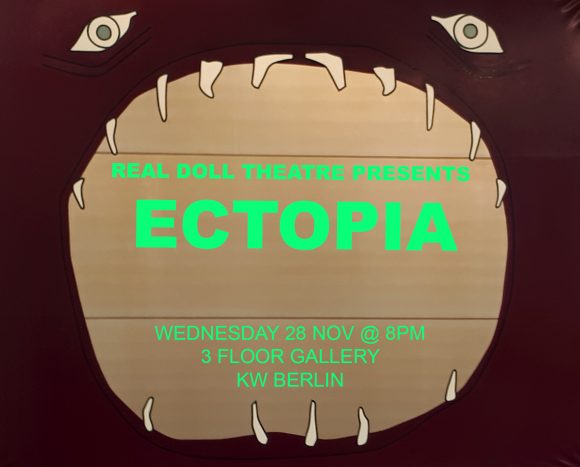 In Medieval theatre, the hellmouth was used as a prop for so called “mystery plays” that would go on for days on repeat. For an illiterate Mediaeval audience in a sparse media landscape, music and chanting were powerful ways to relate moral stories that would regulate behaviour. Despite its status as a prop, the hellmouth was understood as an actual Vagina dentata (Latin for toothed vagina) that viewers could be dragged into and directly consumed by. The insatiable mouth as a signifier for the ultimate place of punishment appears in the vaginal construction of the gaping hellmouth with teeth, generally feline, and damned souls caught in the giant jaws. Feline terminology such as “cathouse” and “pussy” has as much to do with the hellmouth as it does with genital metaphors of lap-sitting small furry animals present in Medieval art and literature.

Within the exhibition Real Doll Theatre, Sidsel Meineche Hansen’s work Hellmouth (To Madame) is used as the backdrop for an improvised musical performance by Ectopia. The latex “pussy” of sex robots and dolls consumes its audience anew.