Screening:
Louise Lawler
A Movie Will Be Shown Without the Picture 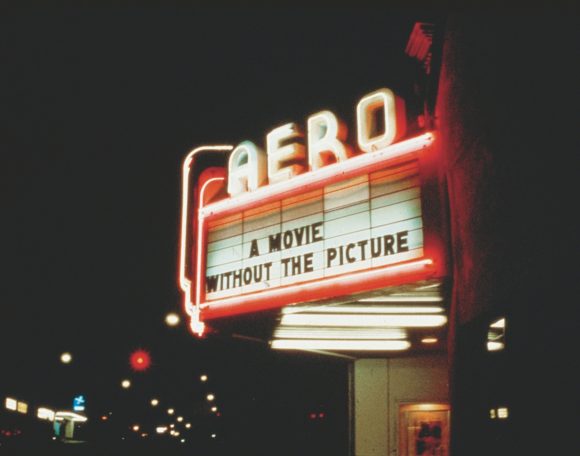 Image: Marquee for A Movie Will Be Shown Without the Picture, Aero Theatre, Santa Monica, California, December 7, 1979. Courtesy Louise Lawler

Stripped of one of its most vital elements, A Movie Will Be Shown Without the Picture challenges the audience to adapt their faculties and experience what remains, in tandem with the underlying mechanisms of the cinematic conventions. As Louise Lawler (*1947, US) discussed with Douglas Crimp, “I was interested in what it’s like being part of an audience for something, whether you’re alone looking at a book, in a gallery surrounded by other people looking at the same picture as you, or in that particularly passive situation of sitting in the dark, eyes glued to the screen, allowing yourself to laugh more when others do. It was important to me that everything proceeds normally, but there would be a single difference, which was announced: “A movie will be shown without the picture.” You weren’t told what the movie was.”[1]

The screening of Louise Lawler’s A Movie Will be Shown Without the Picture will take place at Kino International with friendly support by Sprüth Magers.