The number of visitors is limited. Please register in advance at reservation@kw-berlin.de. 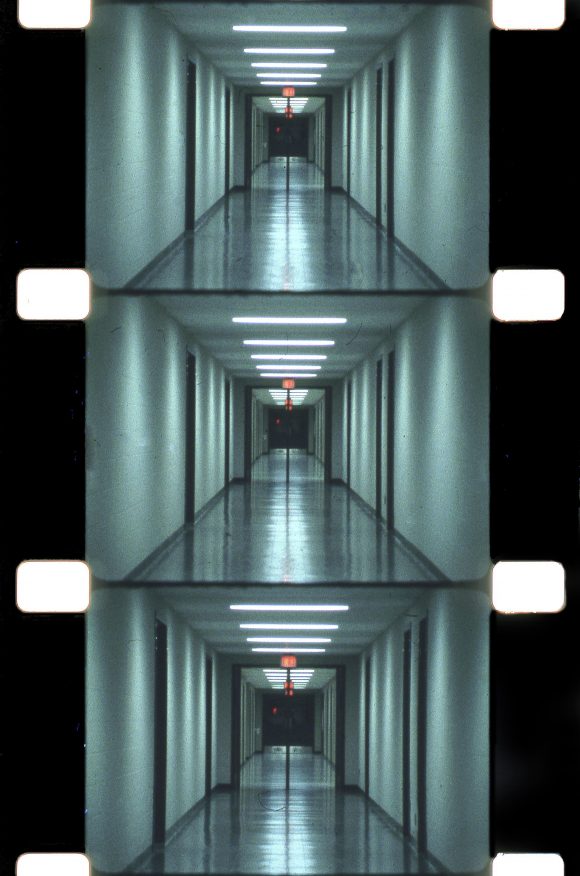 The basic elements of film, such as light, movement, and framing build the very essence of Ernie Gehr’s 1970 film Serene Velocity. Shot over the course of a long night, in the hallway of the University of SUNY Binghamton, where Gehr taught at the time, the minimal film reveals the entire repertoire of possibilities of the medium. Through altering the zoom lens every four frames the illusion of movement and the bridging of distance is created despite the fixed position of the camera. From a vibrating pulse to a trembling crescendo the film invites a meditation on the intersection between photography and cinematography while staying within the utilitarian environment of educational architecture. Or as Gehr phrased it the aim was to “maximize the tension between representation and abstraction”.

Coinciding with the opening weekend of Michael Stevenson’s solo exhibition Disproof Does Not Equal Disbelief the 16mm print will be shown in KW’s courtyard. Stevenson has drawn on this iconic piece of structural film-making as reference for his own project Serene Velocity in Practice: MC510/CS183 (2017/19) on view in the exhibition. The screening will be introduced by the film curator and writer, Madeleine Bernstorff and followed by a conversation between Bernstorff, Michael Stevenson, and KW’s curator Anna Gritz that bridges the particularities of the historic film with Stevenson’s practice at large.

“There’s extreme single-point perspective and space, but the image also reads as flat, as an ornament. But the ornamental presence really comes from the pulsing; the corridor jumps abruptly backward, forward, as the zoom on the lens is adjusted between frames.”