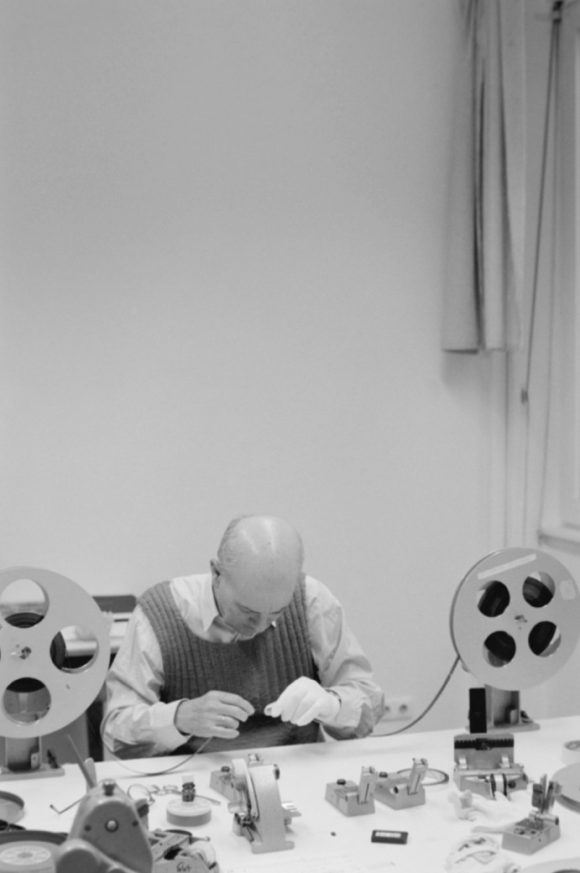 “I saw one of Robert’s early films, From the Notebook of… (1971), which I admire very much, and I thought, among other things, that the way the film unfolds through its own making is really quite close to my idea of a personal epistemology. I also liked that he shows the room he is working in to make the film, which functions as a metaphor for an inner space. I furthermore liked how he relates his room to the space inside the camera—referring to an idea of cognition being located somewhere between the eye and the brain—through the use of filters. I saw parallels to the Kunsthalle here.

It was only a bit later that I had the opportunity to see Early Monthly Segments (1967–1970) and discovered that a big part of what is at play in his later films has its beginning here, articulated in a very playful way, crystalizing right in front of the spectator’s eyes.”

Excerpt from: Jeff Weber, An Attempt at a Personal Epistemology, Roma Publications, Amsterdam 2018

Jeff Weber holds a diploma (2010) from the LaCambre Art School in Brussels. In 2012, he was a resident at Jan van Eyck Academie in Maastricht. His work has been shown internationally including the De Appel Arts Center, Amsterdam; the Casino – Forum d’Art Contemporain, Luxembourg; Roots and Culture Contemporary Art Center, Chicago; the Interfood-Vitrine, Aachen; the Fotomuseum Winterthur and the Erna Hecey Gallery, Luxembourg. He has organized and curated numerous events, lectures, and projects at Kunsthalle Leipzig between 2014–2017. The book An Attempt At A Personal Epistemology is the result of his longterm project Kunsthalle Leipzig, an institution which worked as an extension of his photographic practice and functioned as a conceptual frame to invite others to actively participate. Published by Roma Publications, Amsterdam.

Born in Massachusetts in 1949, Robert Beavers attended public schools then Deerfield Academy before meeting the filmmaker Gregory J. Markopoulos and making his first film in New York. He was encouraged by the freedom of the New American Cinema, and more precisely by the masters of montage within that movement. In 1967 Beavers relocated to Europe with Markopoulos. He has made films in Greece, Belgium, Switzerland, Germany, and Italy. Recent film retrospectives have been presented at the Whitney Museum of American Art, New York (2005), Tate Modern, London (2007), Austrian Film Museum (2010), and Berkeley Art Museum and Pacific Film Archive (BAMPFA) (2016). The next is planned by the Museum of Modern Art, New York for March, 2020. He lives with the filmmaker, Ute Aurand, in Berlin.

With the support of the Kulturstiftung des Freistaates Sachsen, Bourse Bert Theis and the Fonds Culture National, Luxembourg