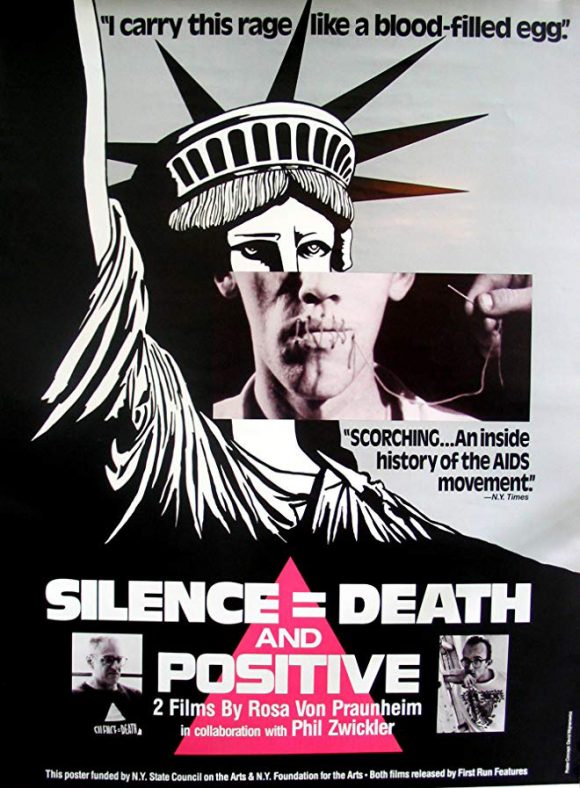 The event Part I (PROLOG): SILENCE = DEATH marks the opening of the exhibition TIES, TALES, AND TRACES. Dedicated to Frank Wagner, Independent Curator (1958–2016), which will be on display from February 8 to May 5, 2019 in the studio of KW Institute for Contemporary Art. The exhibition is curated by RealismusStudio and is intended to commemorate the work of Berlin curator Frank Wagner, who died at the age of 57. He made a name for himself over more than 30 years with groundbreaking and internationally acclaimed exhibitions focusing on critical art, AIDS, gender, and LGBTQI issues. He consistently explored political questions about social conditions, everyday violence, racism, colonialism, fascism, homophobia, and marginalized sexuality with sensitive radicalism. In 1992, the curator dedicated a memorial exhibition at KW Institute for Contemporary Art to the artist David Wojnarowicz (1959–1992), who died as a result of AIDS. Wagner had already exhibited the artist in Vollbild Aids—Eine Kunstausstellung über Leben und Sterben at Künstlerbahnhof Westend in 1988, and in Übers Sofa—Auf die Straße!—Kunst und Kultur im AIDS-Zeitalter at neue Gesellschaft für bildende Kunst (nGbK) in 1990.

The title of the event SILENCE = DEATH refers to the Silence = Death Project of a collective founded in New York in 1985, whose black poster with a pink triangle became the symbol of the ACT-UP (AIDS Coalition to Unleash Power) movement in the fight against AIDS in 198, and to the film of the same name by Rosa von Praunheim from 1990: SCHWEIGEN = TOD. The documentary, which features responses to the AIDS epidemic from artists living in New York, featured HIV-positive artist David Wojnarowicz, who died just two years later as a result of his illness. The film was shown at the Berlinale in the year of its release, where it received the Teddy Jury Award—the queer film award of the Berlin International Film Festival, which was initiated by Manfred Salzgeber and Wieland Speckin 1987. The director, scriptwriter, and producer Wieland Speck, who acted as program director of the Panorama section of the Berlin International Film Festival from 1993 to 2017, is curating the anniversary program in 2019.

The upcoming memorial exhibition for Frank Wagner, which is primarily based on artworks and archive material from the curator’s estate, commemorates his legacy in a larger context. Discussions with companions form the common thread in the accompanying program, which includes events scheduled in advance such as lectures, films, and guided tours, as well as space for pop-up events or situational encounters. Starting from recurring initial questions, they enable polyphonic visions of the curator’s lifework, preserve traces, set trails, reveal relationships, and connect people and institutions through a variety of different stories and shared memories.

The exhibition TIES, TALES, AND TRACES. Dedicated to Frank Wagner, Independent Curator (1958-2016) takes place in collaboration with the RealismusStudio of nGbK and Between Bridges. RealismusStudio is a team of curators with changing members who have realized more than 300 exhibitions and events on contemporary, socially critical art since its founding in 1973. Members among others: Frank Wagner (1985–2016) as well as the curators Christin Lahr (since 1990), Isabelle Meiffert, Ulrike Riebel (since 2016), and Vincent Schier (since 2018). The non-profit project space Between Bridges was founded by Wolfgang Tillmans and will be presenting a further selection of works from Wagner’s estate from February 1 until March 16, 2019, curated by Wolfgang Tillmans and Eugen Ivan Bergmann.

The event on Frank Wagner ist supported by the Senate Department for Culture and Europe as part of the project on David Wojnarowicz, Reza Abdoh, Frank Wagner.