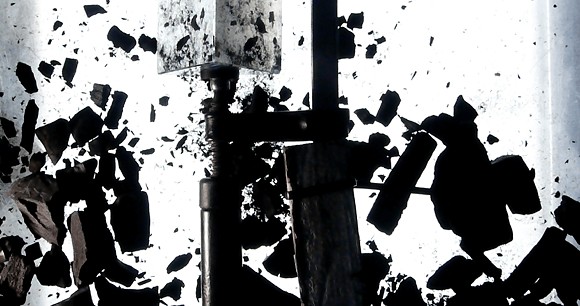 After five years, over thirty concerts, and countless collaborations, FEED draws to a close with one final concert, and presents the artist group Transforma, founded 2001 by Luke Bennett, Baris Hasselbach, and Simon Krahl, performing Graete together with PC Nackt, co-producer of Apparat.

Graete is the name given by Transforma to their audio visual instrument, which consists of mechanical, image- and sound-making equipment, cameras and microphones. In the performance of the same name, In their collaboration with musician and composer PC Nackt, the resulting audiovisual stream is a culmination of both artists actions performed live on stage.

Transforma uses a custom made instrument for their work exploring materials, human processes, tools, and how these tools are used. During the performance, the differentiation between the archaic objects and the modern technological setup disappears. A piece of wood or stone becomes recognisable as a tool, as does a camera or a spotlight. In the first scene, prehistoric humans sit in a cave using wooden sticks to stir a fire. In the last, mod­ern humans analyse the same fire with new machinery. With Graete, Transforma and PC Nackt present an imagined time travel in a sequence of sounds and images.