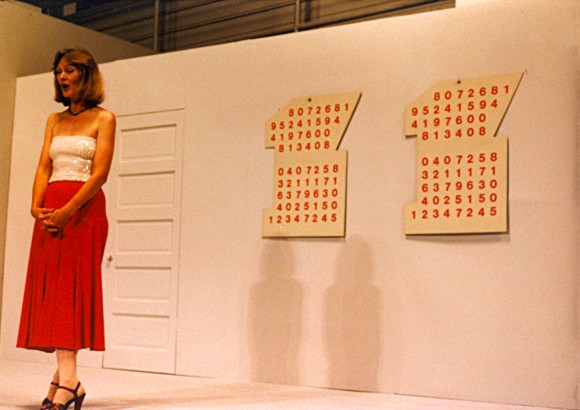 Guy de Cointet has written more than twenty plays, half of which were staged during his lifetime. As a Frenchman in the USA of the 1970s and 1980s he was the perfect observer of the society of popular entertainment. He created a body of work that investigates the borders between high and low, performance and sculpture, theatre and everyday life. His performance Two Drawings was first staged in 1974. It is one of his monologue pieces, staged in front of a wall on which two drawings with an identical composition of numbers are hung. The female protagonist provides the audience throughout the performance with a detailed account of her relationship to these two seemingly identical drawings.

Guy de Cointet (1934–1983) was an enigmatic Los Angeles and New York-based conceptual artist, who had a wide-ranging practice including drawing, playwriting, and performance. De Cointet conceived art as an interplay of colour, language, and form. His fascination for language and meaning are expressed in his drawings, books and performances where fragments of text, colourful objects and props blend the everyday with the absurd. 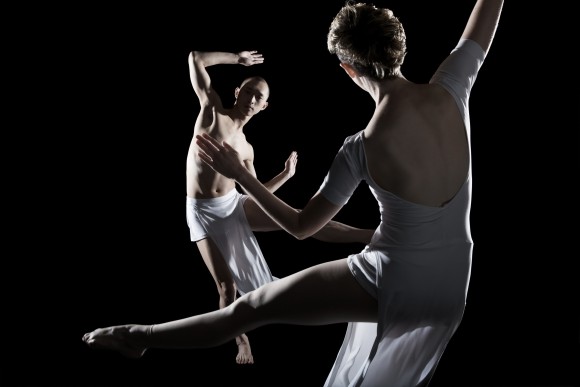 Trisha Brown choreographed and performed the duet You Can See Us (1995) shortly after premiering her acclaimed solo If You Could See Me (1994). Dancing the entirety of If You Could See Me with her back to the audience, allowing only glimpse of her face in profile, Brown intrigued audiences with the solo’s play on perception. She later revisited this concept to develop You Can See Us, and performed the duet first with Bill T. Jones in 1995, and then with Mikhail Baryshnikov in 1996.

Facing away from each other, and moving primarily in unison, the two dancers’ mirrored yet spatially separate movements generate a dynamic tension that defines not only their relation to each other, but to the audience as well. Robert Rauschenberg’s sparse score and sheath like costumes heighten the striking interplay.

Trisha Brown Dance Company (TBDC) is a post-modern dance company dedicated to the performance, and preservation of the work of Founding Artistic Director and Choreographer, Trisha Brown. Established in 1970, TBDC has toured throughout the world presenting the work, teaching and building relationships with audiences and artists alike. Brown engaged collaborators who are themselves leaders in music, theater, and the visual arts, including visual artists Robert Rauschenberg, Donald Judd, and Elizabeth Murray, and musicians Laurie Anderson, John Cage, and Alvin Curran, to name a few. With these partners, Brown has created an exceptionally varied body of work, with premieres and performances for New York-based audiences and international counterparts. 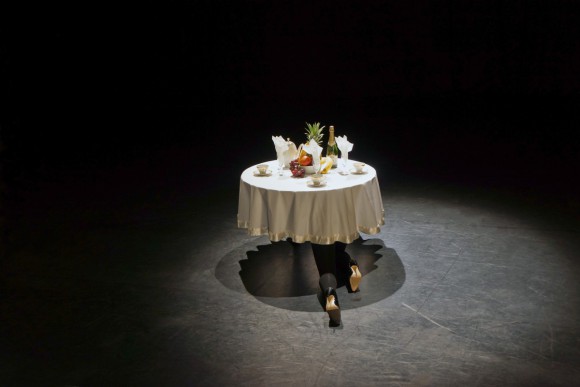 The Belgium artist Miet Warlop positions her practice in between the visual arts and the theatre. For the performance Nervous Pictures (2017) Warlop introduces a plastic language that is created under the eye of the audience, through a succession of theatrical vignettes consisting of physical actions, sculptural props and scenic interventions that artfully cancel each other out on stage. Each scene reveals the immaterial processes that go into the work and turns them into a sculptural live event creating a temporary fantasy that begins to crumble in the moment of its completion. Additionally her walking-table piece The View will be performed throughout the opening night in the ground floor of KW (performed by Paola Zampierolo).

Miet Warlop (*1978 in Torhout, BE) trained in multimedia practices, works more specifically at the intersection of theatre, performance and visual arts. Her theatrical paintings share a powerful tendency towards the surreal and a dose of silent comedy. Lately Warlop has been addressing concepts such as ambition, enthusiasm, determination and the immaterial processes of the works emerging from a sculptural event.