Tickets can be purchased online and at the ticket desk of SOPHIENSÆLE.

Please note that the performance includes strong language and references to wartime violence unsuitable for children. Viewer discretion is advised. 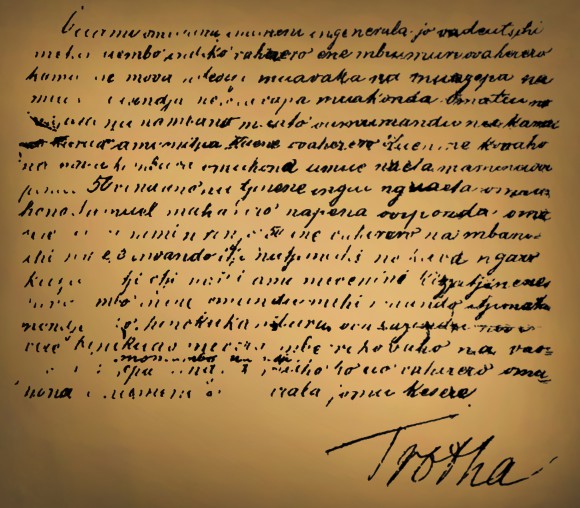 Extermination order of Lothar von Trotha (1904), only surviving copy of the Botswana National Archives RC II/I (edited copy); from: J. B. Gewald: The great General of the Kaiser, In: Botswana notes and records, vol. 26, 1994, p. 72.

For nearly three decades, Coco Fusco has delved into historical records and colonial archives to create works that tease out subtexts and counter-narratives embedded in them. In her new work Words May Not Be Found for the events series The Weekends at KW Institute for Contemporary Art, she seeks to draw out parallels between colonial and contemporary perceptions of non-western “others.”

More than a century after the German military campaign in South-West Africa, the conflict that emerged in response to an insurrection by the Nama and Herero peoples of Namibia remains a source of collective trauma for both nations. The traumatic nature of this history is due in not only to the scale of violence that was carried out against civilians, but also to the efforts to suppress the sole document that contained Namibian testimony relating to the conflict. Fusco’s performance will focus on the struggle over the words of the native informants.

Coco Fusco, born 1960 in New York, US, is an interdisciplinary artist, writer and the Andrew Banks Endowed Professor of Art at the University of Florida. She divides her time between New York, Florida and Cuba. Fusco explores the politics of racial classification and gender, and the role of both in the practice of war. Fusco has performed at exhibited internationally since the 1980s, most recently at Frieze Projects London, the Museo Jumex in Mexico City, and the 56th Venice Biennial, Venice, IT. She has received numerous awards, including the Guggenheim Fellowship, the Absolut Art Writing Award and the Fulbright Fellowship in 2013. She is represented by Alexander Gray Associates in New York.

A collaboration between KW Institute for Contemporary Art and SOPHIENSÆLE.

Please note that the event is taking place at SOPHIENSÆLE.