The performance is free of charge as part of the admission free Thursday evenings at KW. 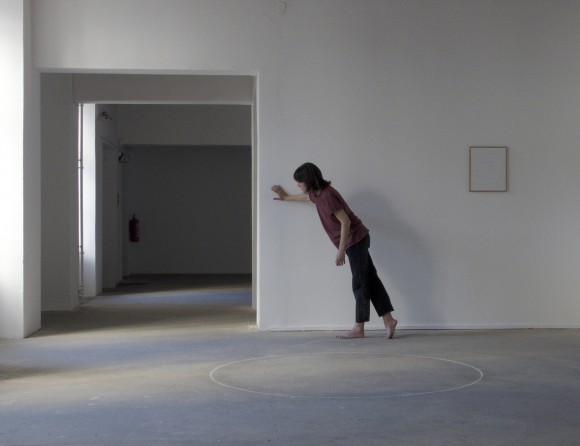 Body Alive with Signals (2009/2017) is a live performance by dancer Elena Giannotti extending from her collaborative work with Paul Elliman as part of his exhibition As You Said, which will be on view 18 March – 14 May 17 at KW. In Body Alive with Signals (2009/2017), Giannotti performs a continuous inventory of gestural movements, from walking, standing, reaching and touching, to wildly flailing movements set off as if by some unseen pulse or signal. The solo is improvised and Giannotti proceeds by attempting to read and follow the signal activity inside her own body: changing speed, posture and direction in a mechanical response to what the body is telling her to do.

In Elliman’s exhibition, Body Alive with Signals is presented as a video that documents a single sequence of movements accompanied by several different audio tracks. On this occasion the work will be performed live, accompanied intermittently by a spontaneous soundtrack.

Elena Giannotti is a dancer and choreographer. Her artistic development has been going through studying and researching different fields of body-work, dance and martial arts. For more than 10 years she has been Rosemary Butcher’s main performer in films and stage creations. She also danced and collaborated with L’Ensemble Dance-Theatre, Virgilio Sieni, Company Blu, Yoshiko Chuma, Daghdha Dance Company, Nicole Peisl at The Forsythe Company, Ioannis Mandafounis, Roberta Mosca, Bruce Myers, Alessandro Sciarroni, and Fearghus Ó Conchúir. Parallelly Giannotti has been creating her own works as well as performing as an improviser.