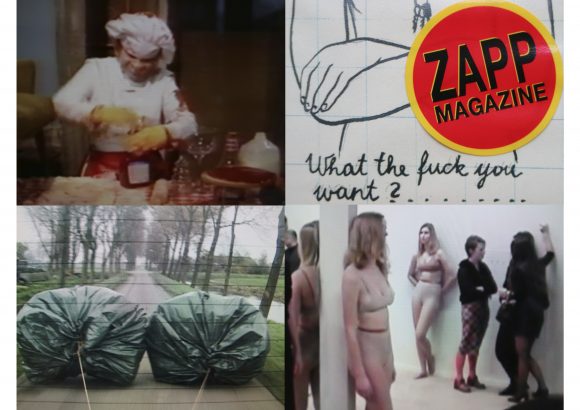 Founded in 1992 and produced until 1999, ZAPP Magazine was a videozine run by a group of Amsterdam, The Hague and New York based artists and curators, Corinne Groot, Jack Jaeger, Arnold Mosselman and Rob van de Ven. A total of twelve issues published, each containing footage of up to 90 minutes, ZAPP Magazine started out as an amateur, home-movie styled format to review, narrate and share art shows, poetry readings and all kinds of art related topics and gossip in New York, Paris, London, Berlin, Copenhagen, Amsterdam, and many more places. Declaring an informal, casual approach, ZAPP Magazine aimed to get closer to the filmed material than any print review, accompanied by usually one image of the work, would do–showing social context, off-the-record or behind-the-scenes-talk, and principally, giving a voice to the artists. The voice of the “critic” seems more or less shut, these documents instead seem to map without scrutinizing, providing a buzzy chronic of 1990’s artists and topics who formed much of an international art discourse at the time, and still do.

The screening will present an approximately 50 minutes selection from ZAPP Magazine’s archive, followed by a talk with founding members Corinne Groot and Rob van de Ven.

Corinne Groot and Rob van de Ven are based in Amsterdam. They run ZAPP Productions which is involved with curating and designing exhibitions, artist video productions and research of artist archives, among others.