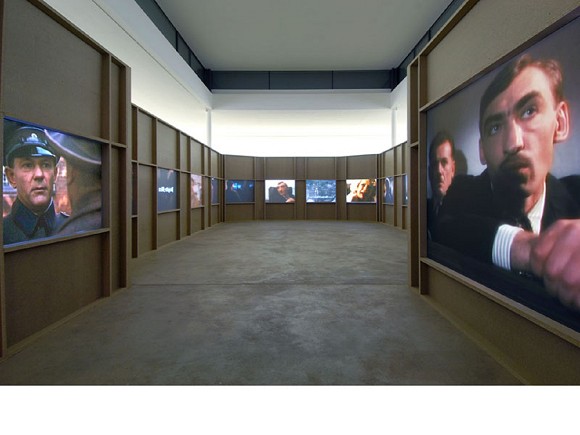 The monumental film Berlin Alexanderplatz that Rainer Werner Fassbinder made for television is based on Alfred Döblin's 1929 novel.
The film consists of thirteen episodes and an epilogue. It runs to fifteen hours and thirty-nine minutes. When it was first screened in Germany in 1980, it triggered heated debates and gained international recognition as one of the cinematic masterpieces of the past decades. A meticulously restored 35-mm version of Berlin Alexanderplatz: Remastered has been successfully presented to the public at the 57th Berlin International Film Festival in February 2007. For the Frankfurter Allgemeine Zeitung, the reproduction has been considered as „the event of the film year".

On March 17, 2007, KW will open Fassbinder: Berlin Alexanderplatz: An Exhibition. The show will present this unusual and fascinating work in a way that enables visitors to choose their own mode of approach. In fourteen separate rooms, the episodes and the epilogue of Berlin Alexanderplatz will be screened in permanent loop. In addition, all the episodes will be shown in chronological order and full length on a central big screen. Visitors can thus decide how they approach Berlin Alexanderplatz: they can divide its unusual length up into pieces, watch episodes several times, or return to the exhibition whenever they like, as the entrance ticket entitles holders to repeated visits. The parallel screening of all the episodes in one place will highlight Fassbinder's impressive visual idiom and his artistically challenging, free and innovative use of images. The epilogue to Berlin Alexanderplatz marks a high point in Fassbinder's creative work, combining visual and narrative planes in a complex collage that anticipates contemporary artistic positions. The exhibition also presents stills from the film's 224 scenes.

For the first time ever photos of excerpts and particularly of sketches from Fassbinder's storyboard will be on view. A further, highly personal document are the tapes on which Fassbinder himself recorded his script for the film and which have never previously been made accessible to the public.

The exhibition is accompanied by a catalogue (in German; approx. 700 pages, 40 Euro), edited by Klaus Biesenbach, with essays by Susan Sontag and Rainer Werner Fassbinder. The catalogue includes extensive illustrations. Furthermore the publication contains the complete screenplay as well as the biography, bibliography, and filmography.

The exhibition will be accompanied by a program of talks and guided tours as well as a film program at Kino Arsenal. You can shortly find further information on the accompanying program at www.kw-berlin.de.

The exhibition project Fassbinder: Berlin Alexanderplatz: An Exhibition is supported by the German Federal Cultural Foundation.

Thanks to the Rainer Werner Fassbinder Foundation

Thanks to Bavaria International

19.04.2007, 19 h
On the role of the actor in Fassbinder's cinema and parallels with performance and theatre

Marc Glöde in conversation with Hito Steyerl and Olaf Nicolai

02.05.2007, 19 h
On montage, collage, and simultaneity in Fassbinder's Berlin Alexanderplatz