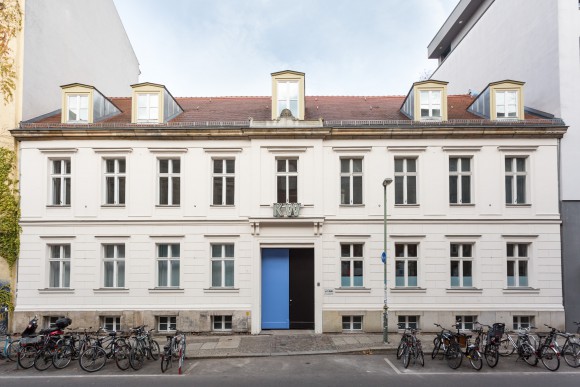 KW Institute for Contemporary Art aims to approach the central questions of our times through the production, display, and dissemination of contemporary art. Since its inception more than 30 years ago, KW has established itself, not only as an institution, but also as a dynamic and lively space for progressive practices within the Berlin art scene, as well as in an international context. By means of exhibitions and various event formats, KW has aligned itself towards the current tendencies of the national and international art and cultural discourse, and has actively developed them on a collaborative level with artists, institutions, and by means of commissioned works. As an institution for contemporary art without a collection of its own, the team at KW maintains a high degree of flexibility in creating its programs and addressing its audience.

Under the responsibility of director Krist Gruijthuijsen, the current program evolves around the central objective of using the participating artists’ perspective as a starting point, entailing their subjects and points of view as ways to reflect on social and political issues. The institution is thereby conceived as a social space that facilitates contemplation and exchange between different protagonists and cultures, consistently challenging its audience. The building complex includes exhibition halls, apartments, offices, and event spaces, as well as the Café Bravo in the courtyard, that was designed by Dan Graham in 1999.

In addition to its internationally renowned exhibition program, KW collaborates on a regular basis with national and international partners, such as MoMA PS1, the Biennale di Venezia and Documenta in Kassel.

KW Institute for Contemporary Art, also known as Kunst-Werke Berlin, was founded by Klaus Biesenbach, Alexandra Binswanger, Clemens Homburger, Philipp von Doering and Alfonso Rutigliano in a derelict former margarine factory in Berlin-Mitte in the early 1990s. Since then, KW has contributed significantly to the development of Berlin as an international center for contemporary art.

In 1995, the heritage-listed front building from the late 18th century as well as the factory building, which dates back to the 1870s, were acquired by the Berlin Lotto Foundation after the settlement of pending restitution claims and made available to KUNST-WERKE BERLIN e. V., the support association of KW, for cultural use.

Thanks to the support of the national urban heritage conservation program, the foundation for heritage conservation, as well as the Berlin Lotto Foundation, the KUNST-WERKE BERLIN e. V. was able to renovate the buildings and add two new annexes: Café Bravo, designed by American artist Dan Graham, and realized in cooperation with the architect Johanne Nalbach, and the expansion of the transverse wing of a 400 m² exhibition hall by the Berlin architect Hans Düttmann. When the newly renovated buildings of KW reopened in autumn 1999, the complex had several office and studio spaces in its side wings, one of the most beautiful courtyards in Berlin-Mitte, and 2,000 m² of exhibition space spread across five floors at its disposal.

Since 1998, the exhibition spaces are also used every other year by the Berlin Biennale for Contemporary Art. Founded through a private initiative in 1996, the Berlin Biennale has been receiving exclusive funding as a lighthouse project from the Kulturstiftung des Bundes (German Federal Cultural Foundation) since 2004. Since then, KUNST-WERKE BERLIN e. V. functions as the support association of the Berlin Biennale.

Since its inauguration, KW has aimed to critically examine current tendencies within society through the production, display, and discourse of contemporary art. By means of exhibitions, commissioned works, and various event formats, KW has aligned itself with the national and international art and cultural discourse through collaborations with artists and other institutions.

Office Manager to the Director
fk@kw-berlin.de

Head of Education and Mediation

Head of Education and Mediation

Head of Installation and Media Technology

Executive Members of the Board

Selected venues at the KW Institute for Contemporary Art are available for hire. Availability complies with the exhibition schedule.

We would gladly put together an individualized offer for you.

Die KW Institute for Contemporary Art are looking for:

The publication on the history of KUNST-WERKE BERLIN e.V., which will appear in 2021 to mark the 30th anniversary of the institution, is generously supported by Volkswagen AG.