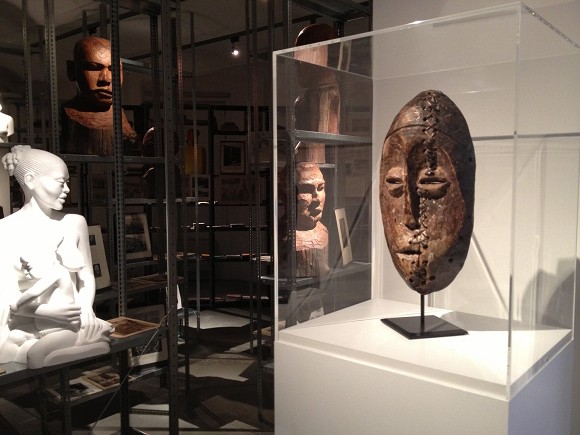 Kader Attia talks with exhibition maker and cultural producer Koyo Kouoh about his exhibition Repair. 5 Acts. Artist and curator are "in an open end conversation over the past few years that revolve around the archeology of modernity in search of African aesthetic and systemic forms that flew into the 'modernist project' without any credit or recognition."
(Quotation: Koyo Kouoh)

Koyo Kouoh works as an independent curator and cultural producer in Dakar, where she founded the Raw Material Company – a center of art, science and society – in 2008. Specialized in video and photography art, Koyo Kouoh was involved in the DOCUMENTA 12 (2008) and dOCUMENTA (13) (2012), as well as in the Dakar Biennial from 2000 until 2004 as a coordinator. Other important exhibitions of Koyo Kouoh include Make Yourself at Home, Contemporary Hospitality in a Changed World (2010, co-curated by Charlotte Bagger-Brandt) at Kunsthal Charlottenborg, Copenhagen;
Geo-Graphics (2010, co-curated by David Adjaye and Anne-Marie Bouttiaux) at Palais des Beaux Arts, Brussels; and Chronicle of a Revolt (2012) at Haus der Kulturen der Welt, Berlin.