In the courtyard of KW 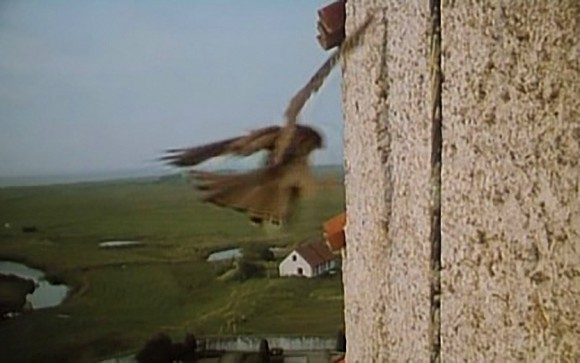 The courtyard at KW is a secluded meeting place, but also a habitat. Many creatures traverse, live in, and forage through this site, guided by their distinct priorities, and desires. The outdoor screening of Kestrel’s Eye (1999) by director Mikael Kristersson foregrounds this space and the experiences of its non-human inhabitants.

The film is an intensive look at the life of a pair of Kestrels nesting in the steeple of a church in southern Sweden. As the Kestrels take the role of central protagonists, the human activities they witness are revealed as incidental. In this way, the film itself makes an attempt to produce empathy – the prioritization of a point of view that is inhuman. Nonetheless, Kestrel’s Eye carries the mark and intention of anthropocentrism, despite the transparency of its execution.

The screening is an outcome of Scott Rogers’ residence in Prospectus: A Year with Will Holder, and a succinct introduction to the forthcoming issue of F.R.DAVID, which the pair is currently co-editing. A series of cigarette lighters will be available to take away, inscribed with the names of birds observed in the courtyard of KW during the month of May.