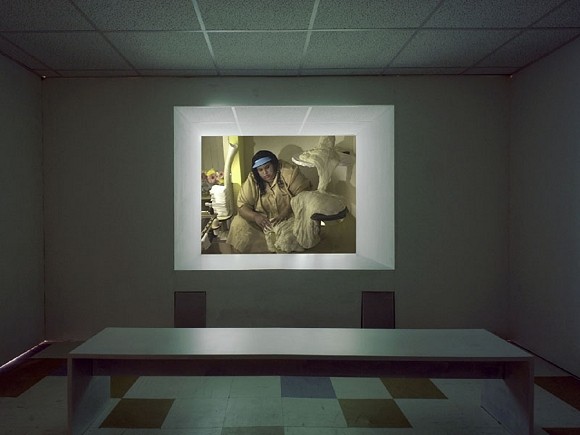 The KW Institute for Contemporary Art is pleased to present Mika Rottenberg’s recent work, Dough (2005/06). This is the New York-based artist’s first solo exhibition in Germany.

Her recent video installations reflect and comment on themes like labour, identity and gender, production cycles, value creation and the commodification of the body in the post-industrial, globalized age. Alienation in the workplace, new production processes and labour structures, the modern concept of work under today’s paradoxical conditions are just as important in her art as the representational system offered by film, the construction and deconstruction of gender, the joys of seeing and the social context of power structures.

The artist uses the internet to find the protagonists of her videos. Her works show women who do not feature in traditional filmic forms of representation, but whose physical idiosyncrasies are the perfect equipment for the production processes staged by Mika Rottenberg.

Her video Dough shows the interaction in a female workforce. Dressed in beige uniforms and crammed into the various levels of a claustrophobic timber structure, the workers operate a perpetual dough-making machine that seems unnecessarily complicated. The dough oozes through a hole in the ceiling. A corpulent worker on the top level announces its arrival with the words “I see it” and thus triggers the absurd production cycle of which the women, through their physical traits and the incorporation of diverse body functions, become a direct part. Their bodies knead the dough, shape it into a sausage and guide it through a hole down to the next level, where another worker, who also looks after a flowerbed that is important at a different production stage, shapes the dough and funnels it down to where her fellow-worker places it on an assembly line. Smaller segments of dough are formed and ejected while the worker on the top level conscientiously breathes in the scent of a bouquet plucked from the flowerbed. A fan operated by her fellow-workers reinforces the allergic reaction that sets in. Tears run down her leg and drop from her big toe through a hole onto a hot tile on the bottom level, where they sizzle briefly and evaporate. The dough rises in the resulting warmth and additional oxygen provided by another worker. It is vacuum-packed and ejected, and the cycle begins anew.

Mika Rottenberg’s installations fuse filmic space and real space and is in constant dialogue with various sculptural traditions. The audience walks around in a shabby structure resembling that to be seen on film and in it meet the real objects of the absurd production process. A claustrophobic situation is produced, which acts like the center of an uncanny but terribly familiar universe.

We would like to thank the Julia Stoschek Collection, Düsseldorf, for their generous support.