The event Weekend #9: Michael Portnoy is fully booked. If you wish to put your name on the waiting list, please write an email to reservation@kw-berlin.de. 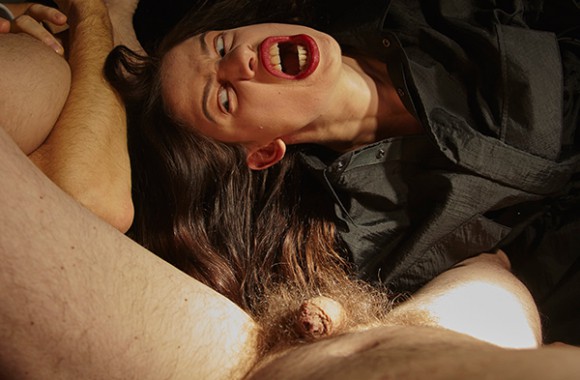 You are a naked, white male, alone in a room with a Larval Bouffon and a Relational Stalinist…

A choreopubopoetic method developed by Michael Portnoy over the past three years, Progressive Touch fuses elements of Erickson Confusion Technique, Weilgart’s aUI, Toning, Eurythmy, Uzazu, Forsythe Technique and Konnakol with the unpredictable rhythmic structures of Prog Rock. Progressive Touch executes a full limbic reboot of the subject’s core ethics centers via their pubic bone. In this series of private, 45 minute sessions, Portnoy and actress/mime Lily McMenamy direct the method towards the corrupted source code of the white male.

All subjects must be naked during treatment and with a minimum of 3 cm of pubic hair. Subjects will sign a non-disclosure agreement and be transported from their homes to an undisclosed location in Berlin.

Lily McMenamy (born 1994 in Bethlehem, US) is an Anglo-American model and performer living in Paris. She has been a part of the New Theater in Berlin and appeared in the 2015 feature film A Bigger Splash. She is currently studying mime and physical theatre at L’Ecole Jacques Lecoq.